If you've been a holdout when it comes to getting government payments electronically, you're out of luck. Uncle Sam is going to force you into direct deposit

The Obama Administration is expected to announce today that soon all government payments to consumers will be made electronically. 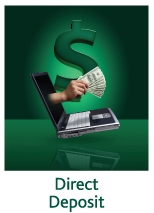 If you have a bank account, the your federal benefits such as Social Security, unemployment insurance, veterans benefits and railroad retirement will go there.

If you don't have an account at a financial institution, Uncle Sam will issue your benefits via plastic using the the Treasury Department's Direct Express Debit MasterCard program.

The feds are hopeful that the transition will be smooth. It already has a good head start.

And once every other federal payment is electronic, can mandatory e-delivery of IRS refund checks be far behind?

Cost savings, recipient protections: The reason for the change in delivering federal money is money.

The Administration estimates that going paperless will save taxpayers an estimated $303 million over the first five years of the program and another $120 million or so each year after that. The feds also will save about $48 million in postage costs.

Advocates of the switch to e-payment say it will get people their money sooner and help protect them against identity theft.I agree with the speed and ID concerns. The hubby and I have made payments to the IRS and gotten the random refund check electronically for years. It is faster.

We made the switch to electronic finances when we moved back home to Texas years ago and didn't know exactly where we would be living or for how long. We didn't want out bills bouncing around various post offices with those little yellow forwarding stickers on them.

Even after we got our permanent Austin address, our mail delivery has had been, from time to time, spotty. So I am more comfortable knowing that I can track my finances and bills, both receipt and payment, electronically when I want and even when we're out of town.

Many of my clients also pay me via direct deposit or PayPal. So now, for the most part, I don't have to worry about someone driving down the our block and pulling a check from our curbside snail mail.

Yes, that type of low-tech federal payments does happen. The feds say that last year, more than 440,000 paper Social Security and SSI checks were reported lost or stolen or had to be reissued, and an estimated $69 million in checks were fraudulently endorsed.

Mark your calendar: As with almost everything government related, there's a phase-in period.

The new electronic payment rule will, for the most part, take effect in March 2011.

In some situations, the direct deposit edict will be postponed until March 2013.

The official announcement reportedly was to be in today's Federal Register. I thumbed through the table of contents, online of course, but didn't see any mention of the proposed change to all-electronic benefits delivery.

When the announcement is made, it should include a comment period during which you and I can tell Uncle Sam what we think of his idea.

Tax refunds too? Preliminary reports on the federal e-payment program also mentioned mandatory e-payment of tax refunds. Later stories, however, leave out those billions of dollars that the IRS delivers annually to taxpayers.

Perhaps someone in Washington realized that including IRS refunds in a program set to go into effect during the final days of tax-filing season was not such a good idea.

There's also the issue of replacing any misdirected refunds that are electronically delivered. Right now, because of the IRS privacy rules, combined with privacy regulations for banks and their account holders, the matter of recovering money that directly deposited into an account is complicated.

Until the IRS comes up with how to deal with erroneously deposited tax money, it can't very well force us to get our refunds that way.

But once this electronic payment of federal benefits is in place, don't be surprised to see the IRS eventually rolled into the program.

It already delivers most refunds via direct deposit. IRS data for the 2010 filing seasons shows that through April 23, the agency issued 93.3 million refunds accounting for almost $270 billion.

Of that amount, 69 million taxpayers had their refunds sent straight to a bank account. Those directly deposited refunds came to almost $217 billion of the total refund amount.

And if we're all getting our money electronically, I'm sure the IRS will hope that means we're all sending in our returns online, too.

I am against anyone mandating that we do anything that has not been voted by Congress. Then if I don't like it, I can vote against the congressman in my district that has voted for whatever insanity they have decided is "good for us".
I suggest this was by "executive order" of the Obama administration. Though no one wants to admit to the crime. Even a search by question of the internet reluctantly comes up with an answer.
You know I used to be a trusting person. I trusted a lot of institutions like banks. Then I found out they are in bed with the government to the point where there is no privacy in our banking system at all. At any moment the government can step in and take everything you own. That is scary in itself because none of us are really safe from thieves legally doing what they want. As long as they have a government cap on its legal. Or only a very wealthy person is in a position to fight them on it.
A very good friend of mine once said, "When rape is inevitable, lay back and enjoy it! Nothing makes the rapist angrier." Well, when I have to, I will go direct deposit.
Since it was an "executive order" from the Obama administration I guess I will vote against the democrats in the next election.

So direct deposit is great, I guess this is why you choose to use it. So then, why is this being forced upon me. Sure, you just go on believing this is not about further government monitoring of law-abiding citizens.

Also on the subject of the saving money justifies all canard, hmmm, elections are expensive, how about we do away with them or at least cut out every other cycle--wow, think of the great savings. And yet, government embraces prevailing wage.

Thanks, Mary, for the Orzag letter link.

Elizabeth, no amended returns in those stats.

I concede that getting the IRS all electronic -- filing, refunds, etc. -- is a monumental task. But that's definitely the direction the agency is going. They will be watching this transition closely to see what problems all the other consumer agencies have with mandatory direct deposit so that they can learn from them.

OMB Director Peter Orzag posted an announcement on the OMB blog stating that the rule will not apply to the IRS.

Curious to know if your figures for the IRS include prior year return refunds or amended return refunds? Currently, at least with amended returns, they will only mail you a refund. (There have been a few rare instances where it goes direct deposit but it has been because we filed the amended shortly after the original).

Seems like they will still be mailing out paper checks in those cases until they have the ability to accept those returns electronically as well. (Which I know is coming in the near future).