When it was pointed out earlier this year that, according to 2008 IRS data, a record 52 million filers (or 47 percent of the 143 million who filed a tax return for that year) had no tax liability, much anti-tax hand wringing and Capitol Hill haranguing began.

The unfairness of it all! The tax system must be changed! Find those not carrying their tax weight and make them pay up!

We don't have names, but the Tax Foundation knows generally where they live. Southern states have the highest percentages of nonpayers. 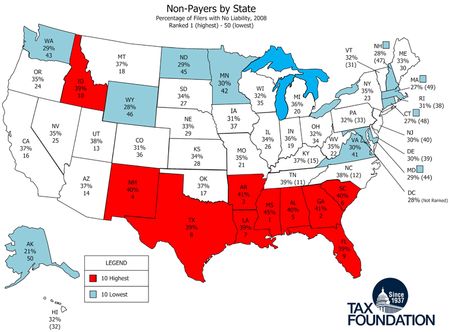 As the map indicates, nine of the 10 states with the most nonpaying filers are in the South and Southwest, with Mississippi leading the nonpayer way. Forty-five percent of federal tax returns from the Magnolia State pay nothing or get money back based on their federal tax returns.

Not surprisingly, all of theses top nonpaying states have among the poorest residents. Georgians fare the best,  with the highest median family income of the group at $60,268. Mississippi has the lowest at $46,668.

These folks pay up: On the other end of the tax-paying spectrum, the states with the lowest percentage of nonpayers tend to be homes to folks with higher incomes. Geographically, they are more diverse, with half in the Northeast and half in the West and Northern Plains states.

Alaska has the fewest nonpaying taxpayers. Only 21 percent of Last Frontier filers end up with a zero tax bill. Massachusetts has the second lowest level of nonpaying filers at 27 percent.

We asked for it: So now we know where the nonpayers live. Let's not forget why they don't owe income taxes.

They aren't tax cheats. They are simply taking advantage of perfectly legal tax breaks to, in many cases, zero out their federal tax liability and even get refunds. Isn't that the true American Dream?

The reason their no-tax circumstances are able to continue -- and the number of nonpayers has been growing over the years -- is because we voters keep pressuring our lawmakers to give us more and more tax breaks.

You know what I mean. There's the credits for just having a kid and to take care of him or her, along with the assorted tax breaks to send young Janie or Jimmy to school.

Don't forget the deductions for our mortgage interest and property taxes and even the goodness of our hearts when we itemize and get receipts for our donations.

Those are just the most popular. The tax code is full myriad tax benefits for all of us.

And residents of Southern states are more able to use more of these tax credits and deductions to whittle down their annual IRS bills to next to nothing or less because many start with lower incomes, which are the target taxpaying sector for most tax breaks.

Our persistent political and tax problem: The problem, and yes, it is a problem, is that by erasing many taxpayers from the federal income tax rolls, it clouds the real costs and benefits of the programs supported by the tax breaks.

Lawmakers simply finagle budgets to pay for them or push the costs well into the future when it will be someone else's worry.

Worse,  statistics showing how many people aren't paying income taxes, even if they're doing so quite legally, only inflames already heated political and tax rhetoric. That, in turn, makes it nearly impossible to hold a rational discussion on tax policy.

So it all comes back to us.

As long as we, the collective U.S. electorate, keep pressuring Washington to give us more and more tax breaks, some of us are going to get away without paying, and others will continue to pick up more and more of the tax tab.

Think about that the next time you start railing at those bums who aren't paying their fair income tax share. And you also might want to stand in front of a mirror when you complain.