Millions of folks are heading to the lake or park or a neighbor's or relative's backyard for today's Memorial Day celebrations. And most of them are lugging a cooler.

We already pay an alcohol excise tax on the beers in those containers.

Now lawmakers across the country are looking at new or extra taxes on sugar-containing beverages to replenish sagging state treasuries.

Yes, drinking Cokes and other sweetened potables is now a sin, at least as far as some tax writers are concerned.

You know sin taxes. They are the extra charges on, as former Texas deputy comptroller Billy Hamilton told Forbes, "the thing the majority of people don't do." That way, legislators can slap a tax on it without angering the bulk of the electorate.

It's a bonus, notes Hamilton, when those who indulge in the activity aren't proud of it.

Unhealthy = sinful: Nowadays, however, lawmakers in cash strapped states (and that's most of them) have expanded their definition of sin.

If it's an activity that could be unhealthy (a la smoking), that's sinful and now a tax target.

That's why sodas which could lead to excess pounds are under fire. Lawmakers often say that since obesity is such a costly health condition, their goal is to price some overweight drinkers out of their calorie-heavy beverage habit.

A national soda tax to pay for health care reform failed (sinful and ostensibly unhealthy indoor tanning took the tax hit instead). But state legislatures are not giving up.

So far this year, reports the Wall Street Journal, officials in at least  20 cities and states have proposed new taxes or the removal of tax exemptions on non-alcoholic beverages. 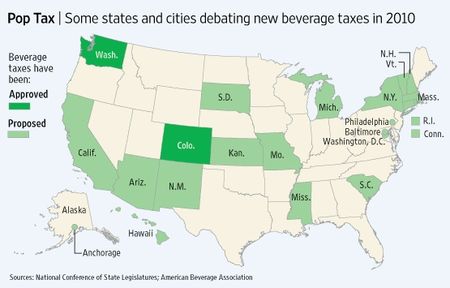 Last week, the Washington, D.C., Council rejected a proposal to boost the federal enclave's income tax on top earners and opted instead to add sweetened soda to the list of products subject to its 6 percent sales tax.

But that's the exception. So far, most of the soda taxes have failed or are still being debated. Perhaps the beverage industry's millions spent lobbying against such measures is paying off.

That and the widely divergent opinions of some experts. While some doctors insist a tax on sugary beverages will help hefty Americans slim down, others aren't so sure.

"Obesity is complex and can't be fixed through food bans or taxes on sweet drinks," says California-based registered dietitian Carol Berg Sloan. "As a registered dietitian, I know that putting restrictions on food and drinks does not teach people how to be healthy. Instead, we need to educate people on healthy eating and diet choices so they begin to think differently about what calories and portion sizes mean to them."

Regressive, but likely: Many tax policy folks also oppose such sale tax hikes as being too regressive. That it, it costs lower income earners more of their money than it does higher wage earners.

"The argument that the tax will hurt the poor is a little more serious," writes David Leonhardt in the New York Times Economic Scene column The Battle Over Taxing Soda. "The average American now drinks almost a gallon of sweetened beverages each week. If the tax passes, any Washington resident who continued to do so would have to pay about $1.20 each week in soda taxes."

To counter opposition, some taxing jurisdictions are trying a reward instead of penalty approach.

But the end result sought is the same: more state and/or local tax money.

And eventually, many of us will probably be paying soda taxes. So enjoy your cheaper sweet beverages while you can.

Tax on tax, they tax soda today, tea tomorrow, hamburger the next day, chicken the day after that. You can see where I'm going. This is crazy, stop it now!