Is it time for tax reform?

The answer to that question, especially soon after most of us have completed our annual tax filing task, is a definite yes.

The practicalities of tax reform, however, always seem to fall prey to Congressional tinkering that makes for good political bullet points but inevitably adds the tax code's complexity.

Touting bipartisanship as well as some specifics of their proposal, the two lawmakers say their Bipartisan Tax Fairness and Simplification Act of 2010 offers comprehensive tax reform "that will make the federal tax code simpler and fairer for all Americans and businesses of every size."

To drive home the simplicity claim, Wyden and Gregg created a mock 1040, pictured below, for their legislation. Click on that image (or here if you're reading this via RSS or the form isn't displaying) for a larger view. 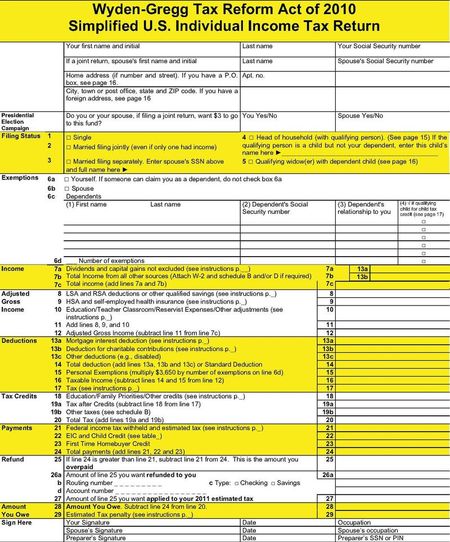 As you can see from that proposed form, there are some substantial changes to our current tax filing method.

In addition to what's shown there, for individual taxpayers, the bill would:

Deductions remain: As a long-time itemizer, I'm intrigued by the almost tripled standard deduction. I'm one of the those filers who might, say the Senators, find it more advantageous to switch to the standard deduction and dispense with all the records and receipts that itemizing demands.

But what about all those valuable deductions I would surrender along with Schedule A?

Some of them would still be around, including the current breaks for mortgage interest and charitable contributions. They would be claimed right there on the revamped, one-page Form 1040.

The reason? That practicality issue I mentioned at the beginning of this post.

"We wanted a viable vehicle, a politically viable vehicle," Gregg said. If the bill eliminated the mortgage interest deduction, it would be dead on arrival in the House and Senate.

Just ask the folks who made a similar suggestion when they were part of Dubya's blue ribbon panel charged with finding ways to simplify our tax system.

And we're still waiting to see what Obama's tax reform panel, established by executive order more than a year ago. The latest word, via the TAx Policy Center is that the panel still plans to report its findings to the president, but it's not clear whether that information would be made public.

The homebuyer credit, however, may be moot. It's about to fade away next week and there hasn't been (yet) a big political push to continue it beyond April 30.

The Wyden-Gregg proposed 1040 also has a separate line for "Education/Family Priorities/Other credits." Again, this generally will include existing tax preferences that help cover higher education costs.

Tax-favored savings, investments: To encourage savings, Wyden and Gregg would consolidate all of today's IRA types into a new Retirement Savings Account and a new Lifetime Savings Account.

With these new vehicles, a married couple could contribute up to $14,000 a year to tax-favored retirement and savings accounts.

In addition, the senators would continue to give investors a break.

They call for a new 35 percent exclusion and a progressive rate structure for dividend and long-term capital gains income.

And to qualify as long-term, the asset holding period would go from one year to just six months for the first $500,000 of a taxpayer's capital gains income.

Change or repackaging? So essentially, is this really a change of our current tax system? Or is it more of a repackaging of what we have now?

I vote for the realigning deck chairs on the Titanic reassembling 95 percent of the existing tax code into a shorter tax form. But I suspect that if that one-page 1040 ever was created, it would require a lot more attachments than most of us use now.

Still, no change can be made without discussion. And at least Wyden and Gregg are getting out there and talking about tax reform. We shall see what, if anything, ever comes of it.

Read more on tax reform: You can read the full Wyden-Gregg bill as introduced or check out its two-page summary.

I vote for major, radical change. My recommendation is to allow taxpayers to directly allocate their individual taxes among the various government organizations at anytime throughout the year.

Yes but changes need to be made slowly. Any sort of major, radical change will need to guarantee that the income it brings in will bring in as MUCH income as we do now....

And most of the tax plans offered such as FairTax and others do not guarantee such a thing.