Those wacky rich folk and their taxes

The Responsible Wealth network, which is part of the Boston-based United for a Fair Economy (UFE), is taking advantage of the impending April 15 filing deadline to say they should pay more income taxes.

These rich folks are signing the group's Tax Fairness Pledge, voicing their opposition to an extension of the previous administration's tax cuts.

We're heard this message before. Last summer, Columbia University behavioral economist Eric Schoenberg confounded Fox Business News anchor Neil Cavuto by saying that he (Schoenberg, not Cavuto) was willing to pay higher taxes because he is financially able and wants to give back to the country. 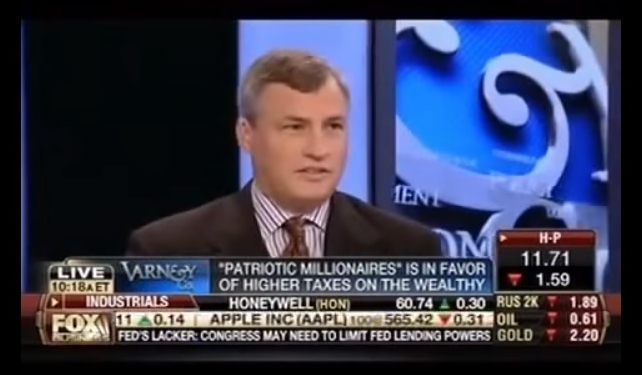 At the time of that interview the focus was on a surtax on the wealthy to help pay for health care reform. That levy as introduced didn't make it into the final health care law, but there will be a Medicare tax increase on high-earners starting in 2013.

This latest group of rich folks (including Schoenberg) say it's now time to go back to the tax levels before Dubya's cuts began in 2001. They and UFE support:

"These tax cuts were irresponsible when they were passed in 2001 and 2003," said Mike Lapham, pledge signer and director of the Responsible Wealth project. "In the midst of a deep recession, they are downright inexcusable."

Citing a research by Citizens for Tax Justice that found nearly half of the Bush tax cuts went to the top 5 percent of income-earners, while the bottom 60 percent received less than 15 percent of the tax-cut benefits, Lapham and his colleagues say the cuts will cost the country $2.5 trillion by the end of this year.

What's in it for you? If you're curious about what Dubya's tax cuts have or haven't meant to your tax bottom line, United for a Fair Economy has created a Tax Cut Calculator to help you estimate your 2009 tax cuts.

For quasi-Luddites, the group also has a printed 1040RW Worksheet (despite its design, this is not an official IRS form) and an "EZ" Tax Cut Table.

Because I cashed in some stock last  year and the hubby and I get some decent tax-favored dividend payments, our 2009 savings per the calculator are just over $4,000.

We definitely don't travel in the same circles as the folks who've signed the pledge and our 2009 tax savings are skewed because of the stock sale. But our situation does show that, as is usually the case with taxes, there are no clear-cut answers.

And no, I haven't signed the pledge … yet.

Congressional tax watch: That's why it's going to be very interesting to see exactly what Congress will do as the tax cut sunset dates approaches.

Recent number crunching of the Obama $3.8 trillion budget, which calls for extending the tax cuts for middle-income families and eliminating breaks for individuals making more than $200,000 and couples earning  more than $250,000, shows that the changes would allow the Treasury to bank about $41 billion next year and $969 billion over the next decade.

So it will, as usual, come down to a weighing by Representatives and Senators of the fiscal implications against the political considerations.

Here are my predictions.

I'm sure the 10 percent income tax bracket will stay on the books.

I'm pretty sure that lawmakers will also explore ways to keep the 0 capital gains rate for some lower-income investors or at least bump it up to no more than its Dubya-cut level of 5 percent.

And I'm confident that Capitol Hill will act on these expiring tax laws before the November mid-term elections.

Of course, I also was sure they wouldn't let the estate tax die, so … .

Pretty bold predictions, we'll just have to wait and see what happens. Although I would have to agree on the 10% income tax bracket staying on the books.

"Of course, I also was sure they wouldn't let the estate tax die, so …"

I love how that is the tag line for ANYONE that gives tax guesses lol! I know I have said it before/often