A glitch with TurboTax netted a federal retiree a federal refund than was $600 more than he should have received.

Whoa up there tax-refund seeking cowboys! The error is limited to a very small subset of taxpayers.

More importantly, the IRS and the company's parent, Intuit, are working on correcting the issue. State officials, too, have been brought into the loop.

According to the New York Times, the error affects federal retirees who received 1099-R forms and who have health insurance premiums paid by their pension administrators. The same expenses can be inadvertently deducted twice, producing a tax-due miscalculation.

The issue was discovered when a retired federal worker, Charlie Freret of Chantilly, Va., noticed that TurboTax had automatically double-counted his medical insurance premiums as deductions.

An IRS spokesman told Tax Analysts that based on the specifics (federal retirees claiming itemized medical expenses), the agency expects the glitch's impact to be "very small." Estimates by Intuit are that around 2,000 folks might be affected.

If, however, you think you might be one of the filers whose refund was overstated because of this, the IRS says to wait until the agency finishes processing your return before filing an amended Form 1040X.

About that refilling: Here's hoping that not too many people have misfiled, as the IRS will find overstated deductions during processing and send the affected taxpayers either smaller refunds or ask for money due.

Officially, the burden of paying the correct tax amount, regardless of whether it's calculated by the filer, software or a tax pro, ultimately falls on the taxpayer's shoulders. You agree to that when you sign (or e-sign) your return.

But it is frustrating when something we depend on to make life simpler screws up, like our computer crashing or our car battery dying or our tax software glitching.

I  just checked my TurboTax packaging and it says, "If you pay an IRS or state penalty or interest because of a TurboTax calculation error, we'll pay you the penalty and interest."

Not that I'm trying to help a very profitable company save a few bucks or anything, but in these particular cases, I think it would be nice if the IRS waived penalties, especially since the agency is always pushing us taxpayers to file electronically.

Old-school tax detective work: How exactly did Freret, who, by the way, gets big kudos for being honest, run across the software problem? 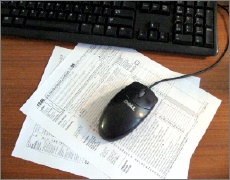 He discovered a discrepancy when he started transferring information that he had hand-entered on paper tax forms to the free online software program in the hopes that e-filing would get him his refund more quickly.

Yep, he did his taxes the old-fashioned way first. "If I had not done my taxes on paper, I would not have known that the problem had come up," Freret told Tax Analysts.

So in the great tax Rochambeau game, paper apparently beats mouse, at least this time.

I encountered a similar situation a couple of years ago in much the same fashion. I always do a down-and-dirty paper return to make sure I have all the data I need to enter into the software.

That year, though, when I ran the software numbers, it thought I'd be getting a large refund whereas my paper calculations indicated I would be paying a little bit to Uncle Sam.

I went poking through all the forms on my computer and discovered that in the electronic version, my self-employment retirement account contribution was counted twice.

Now I may have answered a question two times or incorrectly or hit a wrong button. I'm not sure what caused the error. It was late in the filing season -- Can you believe it? Me, pushing the deadline!? -- so I wasn't really focused on exactly how the error happened. I just wanted my tax data entered correctly so I could be done with filing so I manually changed the amount.

The lesson, both in my case and that of Mr. Freret, is to not blindly trust anyone or anything when it comes to your taxes.

Know what the laws are, which tax breaks affect you and if something seems out of whack on your return, follow up to make sure your filing is correct.