The health care reform debate has cooled off a bit since the changes are now law. But one aspect is still simmering: the role of the IRS.

Opponents of the health care changes continue to worry that it's going to create a super IRS to butt into our lives. 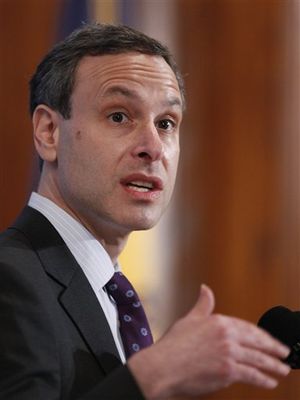 Not so says none other than the IRS' head honcho.

"Our job is going to be to make sure people are educated about all the benefits that are available to them and to get the credits out to businesses and individuals," IRS Commissioner Doug Shulman told attendees at the National Press Club luncheon yesterday.

Shulman's prepared remarks, which the IRS posted on its Web site, focused on the "service" part of of the agency's name:  "[W]hat I want to talk about today [is] public servants and public service and how we at the IRS are advancing and translating a commitment to public service into real services, services that benefit both taxpayers and our nation."

Diverging from the text and elaborating on health care specifics when it comes to IRS services in that regard, Shulman told the Washington, D.C., gathering that it would be the Department of Health and Human Services and insurance companies that will set many of the rules, including determining the definition of adequate coverage.

The IRS' job will then be to follow up on expected insurance company generated forms, similar to 1099s, that will be sent to both the tax agency and taxpayers to make sure the required health care related information is properly reported.

When there are discrepancies and a penalty is assessed, Shulman said, the agency will use its usual procedures; that is, collection of the money by taking out the amounts from taxpayer refunds or by sending folks an IRS notice.

"These are not the kinds of things we send agents out about," Shulman said. "These are things where you get a letter from us."

Shulman said his agency will notify taxpayers about health care policies and procedures as the 2014 effective date gets a little closer.

The commissioner's remarks are not likely to placate skeptics. I understand that. Many of us will face changes in a system that is very personal.

As for how the new health care/IRS interaction is going to eventually play out, I'm personally taking a wait and see approach. And I'm going to borrow a phrase from a politician that many of the doubters hold in the highest regard, Ronald Reagan: Trust but verify.

Previous testimony repeat: Shulman's press club address is just the latest IRS effort to get out in front of the health care tax issue.

At a House Ways and Means Oversight Subcommittee hearing on March 25 to discuss the filing season and the IRS' fiscal 2011 budget request, Shulman also addressed the new 1099 health care forms.

And he refuted a charge by Republicans on the committee that the new law would require more intrusion into taxpayers' lives, fundamentally changing the existing relationship between the IRS and American taxpayers.

Shulman told the subcommittee members the IRS would not be verifying that Americans have adequate insurance: "There will not be any discussions [with taxpayers] about health coverage with an IRS employee."

More money, more agents? The other issue raised by health care opponents is whether the IRS can afford to do any new tasks.

The numbers usually cited in this regard are more than 16,000 new agents that will cost of $10 billion a year.

Factcheck.org says those figures are wrong:

The law requires the IRS mostly to hand out tax credits, not collect penalties. The claim of 16,500 new agents stems from a partisan analysis based on guesswork and false assumptions, and compounded by outright misrepresentation.

And Derek Thompson, an editor with The Atlantic magazine's business section views any additional IRS employees from another perspective.

Even if the 16,000-plus figure is even close to correct, what's so bad about that, asks Thompson. It is, after all, job creation.

As someone who has worked at the IRS in the past, I laugh at people who think the IRS would go after people STRICTLY because of their lack of health insurance.

Republicans pushing that lie really have no clue how agents and the IRS works.

The IRS needs many more workers and the taxpayer wins if agents have more time to do their cases.