How's the party going? Wait, aren't you celebrating? You should be. Today is Tax Freedom Day.

OK, so it's not an official U.S. holiday. And it's slightly less festive than last year.

As a nation, we had to work a day longer in 2010 than we did in 2009 to reach the point that the Tax Foundation calculates as the day we've earned enough money to pay this year's tax obligations at the federal, state and local levels.

Basically, Tax Freedom Day answers the question, "What price is the nation paying for government?" Using the latest government data on income and taxes, the Tax Foundation takes total tax collections and divides that amount by the total U.S. income.

In the larger scheme of things, however, today's Tax Freedom Day is two weeks earlier than in 2007. And in 2000, the day was celebrated May 1, the latest date ever.

The overall U.S. tax burden has been moving lower over the last few years, say Tax Foundation researchers, because of three factors:

But even with these tax reductions, Americans will pay more taxes in 2010 than they will spend on food, clothing and shelter combined. 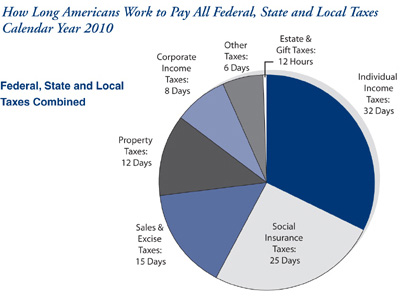 Payroll taxes take another 25 days to pay off.

Sales and excise taxes, mostly state and local, demand that we work 15 days.

Budget deficit discounted: Since Capitol Hill seems for the most part to ignore the budget deficit, Tax Freedom Day doesn't count that escalating figure either.

If American taxpayers were required to pay for all government spending this year, including the $1.3 trillion federal budget deficit, The Tax Foundation figures we'd be working an additional 38 days, until May 17, before we had earned enough to pay our  taxes.

Separate state days: Each state also has its own Tax Freedom Day.

Because of modest incomes and low state and local tax burdens, Alaska and Louisiana celebrate Tax Freedom Day the earliest, on March 26.

The major difference between the state days is that states whose residents have higher incomes pay much more in federal taxes, and they often have higher state and local taxes as well.

Here in Texas, our Tax Freedom Day arrived in Texas on April 5.

The map below shows each state's special day and ranking for 2010.

Full details on the national and state data and implications are in the Tax Freedom Day 2010 special report.