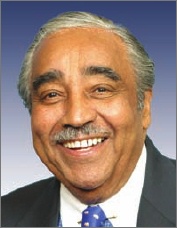 Rep. Charles Rangel has stepped down temporarily as chairman of the Ways and Means Committee.

The New York City Democrat said this morning that he asked House Speaker Nancy Pelosi for a "leave of absence" as chairman of the powerful tax-writing committee.

Many (including me) have for months called for Rangel to give up his leadership spot on the powerful tax-writing committee. He finally decided to do so after support for him wavered in recent days.

Pete Stark of California or Sandy Levin of Michigan are the lop contenders to take the Committee helm.

Rangel's resignation is seen as critical to the Ways and Means' credibility, as well as a political necessity for the Democratic party this election year as debate ramps up on several volatile issues.

The  Committee was key in determining the debate Obama's health care proposals. It also will take the lead in dealing with the extender tax breaks that the Senate is finally working on, as well as any reinstatement of the estate tax and myriad tax changes that are looming with the Dec. 31 expiration of Dubya's tax cuts.

Rangel's position as Ways and Means Chair (if not his House seat) was imperiled further last week when the House Committee on Standards of Official Conduct admonished him for two corporate-sponsored trips to the Caribbean in 2007 and 2008.

House ethics investigators also have been looking into allegations that Rangel failed to disclose or pay taxes on income from rental property he owned in the Dominican Republic.

Rangel's resignation also comes just as Rep. John Carter (R-Texas) was planning to introduce yet another measure to remove Rangel as committee chair. Previous efforts failed along party lines, but this time more than a dozen Democrats have asked Rangel to resign, indicating the proposal might pass.

I think money from taxes or revenues from taxes that can be considered and used by criminals for the criminal purposes of maintaining or expanding the borders of crime contaminated communitys should be eleminated.

I think specific tax revenues for the purpose of expanding the esential function of say a banking enterprise is OK and necessary and also not a crime if the repsonsible person for initiating the government support funds is also an investor in the same business entity even if the specific person is affiliated or a direct member of that government agency responsible for legislating the rendering of the business revenue service(s).

If their is proven to be a need to complete paying taxes for a previous tax period and the income tax report(s) necessary to note and pay the in question tax pends the service of another business affiliated or not individual, then the in question tax payer should not be considered guilty of an infraction unless they deliberatley avoided noting the inquestion tax difference for reason(s) of illegal financial or other gain.