Are you ready for a Roth conversion?

A Roth IRA is a great option for many folks looking to sock away retirement money. While you pay taxes on the money you put into the account, that's offset by no taxes due when you eventually start taking money out.

A lot of folks don't have Roths, though, primarily because they make too much money.

There's an income limit on who can open and contribute to the plans. Generally, you can contribute to a Roth IRA if your modified adjusted gross income (MAGI) is less than:

If you made less than these limits last year, you can have a Roth, but you might face a limit on just how much you can contribute to the account. 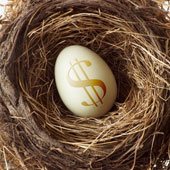 For those of you who've already maxed out your IRA for last tax year, the 2010 income caps for a Roth are the same for single, head of household and married filing separately taxpayers.

Married joint filers, however, can have MAGI up to $177,000 in 2010 before they lose the opportunity to put some cash into a Roth.

No more income hurdle for conversions: There also used to be an income limit of $100,000 on converting a traditional IRA to a Roth. That restriction is now gone.

Starting this year, you can transfer your traditional retirement account money to a Roth regardless of how much you make.

Even better, if you do roll over your traditional IRA to a Roth IRA in 2010, any converted money that you'd have to count as income can be pushed, in equal amounts, into the 2011 and 2012 tax years.

Note, too, that this deferral option is available only for traditional-to-Roth conversions completed in 2010.

Consider conversion's possible tax costs: The conversion and split tax deferral options are great for many folks, but not all.

If you have to use some of your IRA money to pay any tax bill, you need to run the numbers to see how long it will take you to recoup that cash.

You also could face a penalty for using that money if you're younger than 59½.

And remember that it's very likely that the tax rates for the upper income brackets will be higher in 2011.

Dubya's tax cuts aren't in effect that year unless Congress decides to extend them. Given Obama's focus on increasing rates on higher income earners and the persistent deficit, wealthier folks better get ready to pay Uncle Sam more next year.

So if you already make a lot of money or the converted IRA money will push you into a higher tax bracket, it might be wiser to pay any taxes due in 2010 while the rates are still at historic lows.

My Bankrate tax tip Plan for taxes due on a Roth IRA conversion discusses this an other things to think about if you're considering a Roth conversion.

Want to tell your friends about this blog post? Click the Tweet This or Digg This buttons below or use the Share This icon to spread the word via e-mail, Facebook (become a fan of the Don't Mess With Taxes' page!) and other popular applications. Thanks!

When I did the conversion of a traditional IRA to Roth IRA in 2009, I didn't look at how that conversion might impact the taxation of our Social Security income. I have now discovered that 85% of our SS benefits will be taxed for 2009. In 2008, our income was so low that we had not been required to pay any taxes on our SS benefits.

Thanks for this info another site which has helped me a lot is www.growingmyira.com

I suspect fewer than 20% of people will save enough to run the risk of retiring in a higher bracket, if only from the data I see out there, nearly 50% having no savings at all.