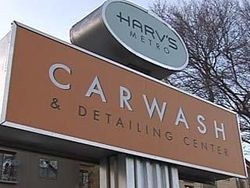 Aaron Zeff had no idea he was a tax delinquent until two IRS agents showed up last week at his Sacramento car wash.

So the IRS sent two people to collect four pennies?

Actually, the bill was a bit bigger. Over the last four years the unpaid tax debt had grown to $202.35 thanks to interest and penalty fees.

Zeff thought he had paid all taxes due from his business, Harv's Car Wash. And he has no idea how that 4 cents the IRS says he didn't pay grew into more than $200.

But the California businessman needs to talk to Peter Pappas, who pens the Tax Lawyer's Blog. Pappas notes that the IRS didn't just use the unpaid four cents as the basis for its penalty and interest calculations. Zeff's full, original tax bill likely was the starting point for its computations that produced the eventual $200-plus amount.

Zeff is now working with the IRS to pay off the the $202.31 in penalties and interest plus, of course, the four cents he neglected back in 2006. And he has an incredibly good attitude about the tax ordeal.

"There's no malice here," Zeff told the local ABC affiliate News10. "(The IRS is) interested in doing their job and I'm just interested in staying in business."

To top it off, Zeff is turning his tax trouble into something good for others. On April 15 Harv's will charge only 4 cents for basic car washes.

Customers do have the option to pay more, with any excess to be donated to a Sacramento shelter for victims of sexual assault and domestic violence.

The price of penalties: While the personal appearance of two IRS employees to collect on a relatively small overdue bill got a lot of attention, it does underscore the reality of how tax penalties can add up.

I'm not sure if the California car wash situation prompted it, but the IRS just released a list of Nine Things You Should Know about Penalties. They are:

The bottom line is that if you can't pay Uncle Sam what you owe, go ahead and file your tax return anyway. That way the penalties and interest won't accrue as quickly while you look for ways to pay your IRS bill.

erm...really...what kinda compound interest rate will make 4 cents into $200++. If this is the case...this is particularly scary.

Are we sure this story is actually true?

Thanks, Peter, for your sharp legal eye! I've clarified (I hope!) the issue.

Thanks for the mention.

Let me point out that the numbers in my post are arbitrary and were used only for the purpose of showing how Zeff might have ended up with the tax bill he got.

I have no idea how much he originally owed to the IRS.