Here on the ol' blog, I tend to focus on federal filings. That's because most of us at some point in our lives have to file paperwork with the IRS.

But there also are state taxes. Since there are 50 of them, plus the District of Columbia, and just one of me, the states get somewhat short shrift here, at least when it comes to specific filing responsibilities.

However, as we head into the 2010 filing season home stretch, I'm going to remedy, at least partially, this oversight.

I've created a separate page with links to each state's and D.C.'s official tax department Web sites. I've also put a link to it in a new section, State Tax Help, in the right column, right under the Daily Tax Tip feature. 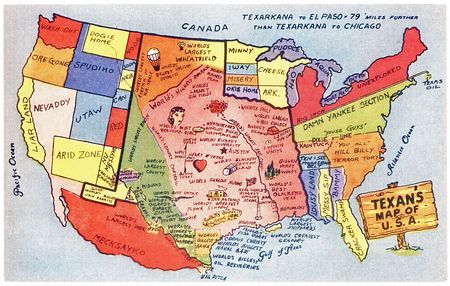 The state tax sites list is alphabetical, and yes, I use the real states, not those in the Texan's map of the U.S.A. If you want a closer look of this fun page, which was part of a calendar I bought at Marfa Book Company a few years ago, you can click on the image (or here if it's not showing up in your browser).

The state tax Web sites list also notes the filing deadline for each state, just in case you folks in the 43 states where you have to submit annual state income tax forms have forgotten.

Thirty-eight states and Washington, D.C., want filers to send in their state personal income tax forms on the same day that federal returns are due.

And seven states don't tax income, but they have plenty of other taxes that residents (and visitors) need to be aware of. Plus, I've lived in two of them, Texas and Florida, so I'm personally interested.

Just the facts, ma'am: Back in 1999 when my writing turned to primarily taxes, only a handful of state tax offices were online so it took a while, and lots of calls, to find what you needed on the state or local level.

Now all state revenue offices have a Web presence, several of which also include information about more local levies, such as real estate taxes. Many of of the state tax sites are outstanding, both in the material they present and the ease of use.

So rather than reinvent the wheel, I'm directing you via my new state tax departments page to those official offices.

However, in the course of another project (updating Bankrate's state tax pages; that info will be posted over there very shortly), I ran across some fun tax tidbits about each state. And I'm going to put some of that excess tax info to use here.

Starting today and until we're through all 51 jurisdictions, I'm going to share something about each state's tax laws or regulations. The posting order will be a combination of alphabetical and tax deadline. That way, we'll get through the states with April 15 deadlines before that actual due date arrives.

I'll post a blurb on our first featured state, Alabama, this afternoon.

I hope y'all will find each of these separate state tax tidbits, along with the new state tax departments page, useful and, in some instances, entertaining. Hey, if we can't smile at some goofy tax laws, then what's the point, right?

And as always, if you have any state (or local) tax comments, contributions or questions, please share.