Questions have swirled around this tax break since its creation back in 2008. Every time it's been tweaked -- three times in less than two years in case you're keeping score -- more questions come up.

And with the tax break's latest iteration back in November, a whole new group of folks, long-time or move-up buyers, have been asking questions. If you meet this provision's guidelines, then you can claim a credit of up to $6,500 on your return.

"Some people think you actually have to sell. That's not the case," says Bob Meighan, vice president of TurboTax. "You can keep that home if you want. You can convert it to a second home or to a rental or vacation home. But you have to use that new home as your primary residence."

There also are plenty of queries about just what it takes to be considered a long-time buyer.

And this is where the specificity of words comes in.

Two terms have been used in discussing what qualifies, for tax credit purposes, someone as a long-time resident: "current" and "same."

The operative word is "same." That's what's in the legislative language and in the guidance offered by the IRS:

A long-time resident of the same home can now qualify for a reduced credit. You can qualify for the credit if you've lived in the same principal residence for any five-consecutive year period during the eight-year period that ended on the date the new home is purchased and the settlement date is after November 6, 2009.

There is nothing in the homebuyer credit that says "current." Some explanations of the new law, however, have used that word. Here's what I think happened.

Folks, like me, who are trying to translate stilted government phrasing into pleasing informative articles usually try to avoid repeating the same words too many times. Yes, Peter Mark Roget is our hero.

That's why we have two names for the expanded credit: long-time resident, which is the official term, and move-up credit, used in some explanations and based on the presumption that current homeowners will buy a bigger, better home now that they have a tax break.

But readable copy and legal preciseness are sometimes incompatible. That's the case here.

There has been an assumption that folks who will claim the long-time resident credit will use it because they meet the residential usage criterion based on time spent in the house in which they currently live.

That probably is the case for most filers who use the credit. But not for all.

As the question #5 in this homebuyer credit Q&A story I wrote indicates, some folks amassed their five consecutive years early in the eight year time frame set out by the new law. Now they're in another house they haven't owned or lived in for as long, or are possibly renting.

But they still qualify to claim the $6,500 credit.

Myriad home-related credits: Not only do we taxpayers have to figure out the first-time or long-time resident homebuyer credit rules, there other tax breaks our residences might afford on our 2009 returns.

One of the most popular (and one the hubby and I will claim on our taxes) is the energy efficient upgrade tax credit.

Here if you make home some common residential improvements that meet Energy Star standards, you can claim 30 percent of those costs, up to a $1,500 maximum, as a credit.

If you want to make more elaborate, and costly, energy improvements -- geothermal, wind, solar systems -- the credit is a flat 30 percent of the expenses without any dollar limit.

FIXr, an online marketplace for home improvement, renovation and repair services, has produced the nifty flow chart reproduced below that takes you through the homebuyer and energy improvement credits. 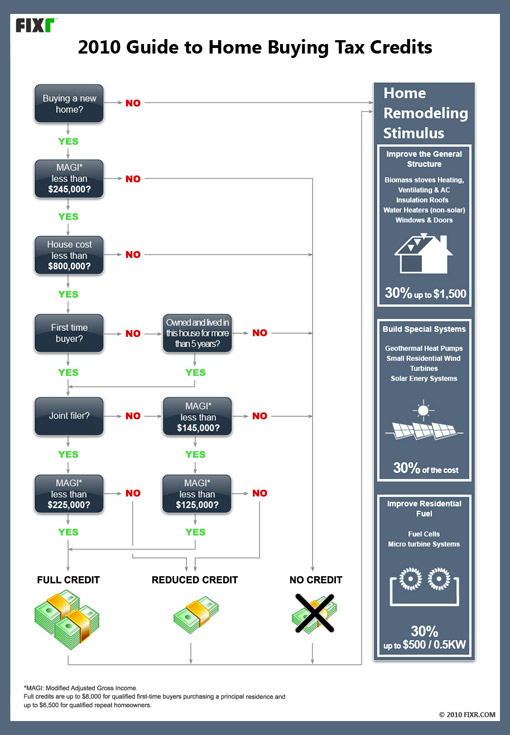 If you didn't make any qualifying energy upgrades in 2009, don't worry. This credit still will be available next filing season for qualifying home improvements you make in 2010.

More information on these credits is available at this special Energy Star federal tax credits page.