With Toyota's troubles, General Motors and Ford are hoping to get new customers who now want to give the domestic car makers another shot.

And some of those who might have had their hearts set on a Prius are perhaps looking at other hybrid options.

If you are a Blue Oval fan, then you might want to go shopping for a fuel-efficient Ford sooner rather than later.

Remember that tax credit for hybrids? The one that dwindles as a manufacturer sells more and more of the vehicles?

Well, the hybrid tax credit is phasing out on eligible Fords. In fact, the last day you can buy one of that company's hybrids and still get any credit to claim on your 2010 taxes is March 31. 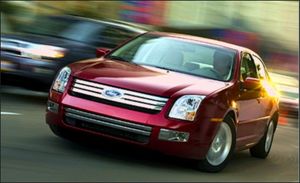 I must also point out that Ford is having its own issues with some of its hybrids.

The company is installing a software fix on the braking system of 17,600 Ford Fusion and Mercury Milan hybrids. Ford says that should alleviate the feeling that the brakes are failing when the driver hits them.

So shop carefully, regardless of which fuel-efficient vehicle you're considering.

Lots still available: If you want another make (I'm still a Chevy girl myself), the IRS has compiled a list of 2010 tax-credit eligible hybrids.

You also can check out the quarterly sales numbers for all the fuel-efficient hybrids that qualify (or previously qualified) for the tax break. As you can see, there are many that are nowhere near the 60,000 in sales cut-off mark.

And FuelEconomy.gov keeps track in a nifty tabbed format -- you can view by manufacturers or get a complete alphabetized by car maker list-- that shows the qualifying vehicles and credit amounts.

As you can see, there still are plenty of hybrids that could save you some tax, not to mention gas, money.

Remember, though, the credit for any hybrid ends on Dec. 31.

Nothing new: Unfortunately, recalls are just part of business.

From the misery loves company files, Reuters has put together a timeline of major auto recalls.

A look at hybrid buyers: Interesting article from Road & Track on hybrid buyers. Who buys hybrids? Why? And how rational are these purchase decisions?

The magazine says there are five typical hybrid purchasers, with some overlapping traits among the groups. But each group, says R&T, is "surprisingly disparate, each expressing particular attractions to hybrid ownership."

Thanks to Blake Christian, aka @taxcredits_CPA on Twitter, for the hybrid story tip.

NASCAR weather report: The flip side of hybrids are the stock cars that hit the track this past week.

The NASCAR season kicked off from Daytona. And just like last year, weather has been a factor.

How to deal with the inevitable rain that beleaguers stock car racing is the subject of my latest Crazy Woman Driver and Views from the Grandstands columns.

What? No Danica? Just a footnote this time (see the Loose Lugnuts at the end of the columns). I wrote about Ms. Patrick and the many other successful women in racing years ago.

As for this foray-into-NASCAR gimmick, suffice it to say that for once, I agree with Kyle Busch.