Well, the NFL season is over for me now that the Cowboys choked lost to the Vikings this afternoon.

The good news is that other sports -- and taxes -- now will have my undivided attention. And it's already started.

The Times of London reports today that new tax rules in the United Kingdom "threaten to drive away some of the biggest overseas names from showcase events in Britain."

What this means is that if a sports star plays, for example, in two tournaments a year and one of those events is in Britain, the athlete could be charged 50 percent tax on half his or her total annual sponsorship money.

"The size of endorsement taxes can far exceed the appearance fees and winnings that stars earn while competing here," says the Times.

"In previous years the tax charge would be based on how many days of the year the sportsman was in the U.K. So if they played in a two-week tournament, one 26th of their endorsement income would be liable for U.K. tax," said Warburton.

"Now, HMRC bases it on what proportion of your competition events are in the U.K. So, if you only play five tournaments a year and one of them is here, one fifth of your endorsement earnings would be liable for tax."

That's steep enough to make even us working stiff sports fans feel a bit of the athlete's tax pain.

Nonresident tax costs also high: The tax could be a problem for visiting athletes.

Tax experts told the paper that the rules could, for example, end up costing American golfers who play in the Ryder Cup in Wales this October hundreds of thousands of pounds (and dollars) in endorsement taxes even though they will not receive an appearance fee. 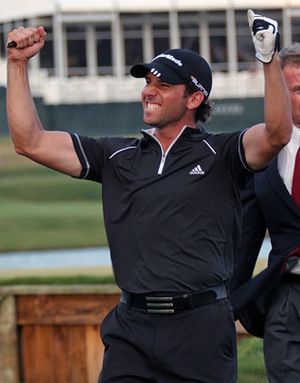 Spanish golfer Sergio Garcia (right) has adjusted his schedule. He played five tournaments in Britain in 2001, but plans to play just one in the country this year.

The popular young golfer has a lot of sponsor deals. Because the endorsement tax costs him more than potential tournament winnings, Garcia says he has to think twice about playing in Britain.

British tax collectors reportedly are setting their sights on the country's premier tennis competition, looking to pick up some dough from Roger Federer and Maria Sharapova when they come to play at Wimbledon this summer.

The world's most watched sport, football (or soccer to us Yanks), also is quite worried -- and planning ahead. FIFA, football's ruling body, has already asked for an exemption for the 2018 World Cup if it is held in England.

This system, which actually applies to any taxpayer who works in dual jurisdictions, allows states (and cities and counties) to collect income tax on the money earned by the professional athletes (and others) when they are doing their jobs within the state's (or city's or county's) borders.

In many cases, the taxes are offset at tax filing time by a credit against the worker's (or athlete's) home state taxes. Unless, of course, it's me or the hubby or one of the Cowboys here in Texas, where we don't have to deal with a state income tax.

That's the only upside of the Cowboys loss today, for the players at least. They don't have to worry about additional taxes to New Orleans and Louisiana tax collectors.

This post is an example of the reality behind of those success of every sports and we are talking about money here. I learned a lot, that was good. Thanks for sharing !

I thought it was going to be some boring old post, but it really compensated for my time. I will post a link to this page on my blog. I am sure my visitors will find that very useful.