A look back at the decade in taxes

It's been a wild time for taxes, not only in just-ended 2009, but the last decade.

While I'm not one for dwelling in the past, I do believe that old saying that those who don't learn from the past are doomed to repeat it. And that's certainly true when it comes to taxes.

So before we get knee-deep in our annual tax-filing tasks, let's take a quick look back at the tax legislation that got us here. Below are my top five federal tax developments over the last

Learning his daddy's hard lessons of "read my lips," Dubya made sure to carry through on his campaign pledge to cut taxes.

Of course, fiscal realities meant that they couldn't all happen So many of the tax provisions of 2001's Economic Growth and Tax Relief Reconciliation Act were phased in over the decade.

Its key rate provisions include the creation of the 10 percent tax bracket; broadening the 15 percent bracket to help ease the marriage penalty; and gradually lowering the top tax rate from 39.6 percent to its current 35 percent.

In addition, the child tax credit went from $500 to $1,000; capital gains taxes for most were cut to 15 percent (from 20 percent); certain dividends got a new lower tax rate; and the estate tax was phased out.

The biggest downside of all these cuts? They are temporary. Unless Congress acts, things will go back to pre-Dubya tax times on Jan. 1, 2011.

2. Rebates, rebates, rebates
As part of his tax cuts, Dubya popularized the rebate craze. When the 10 percent rate appeared in 2001, the difference in savings it created was mailed to eligible taxpayers as a rebate check.

Another rebate followed in 2003. The 2008 stimulus program produced even more rebate checks.

Obama has kept this up in a fashion. While actual checks weren't delivered, the Making Work Pay credit was handed out via less payroll withholding instituted in mid-2009. That will continue in 2010. But assorted retirees, who were feeling left out, did get real $250 rebate checks.

In all these cases, the rebates were relatively minimal, especially when compared to the large amount of confusion, frustration and anger they generated.

Here's hoping this rebate mania will soon fade and be replaced with legitimate tax reform. Sorry, I went crazy there for a minute.

3. Congressional procrastination
We all want our lawmakers to be judicious and act deliberately when it comes to laws that affect our lives. But c'mon guys! The key word here is "act."

Congress, however, is prone to procrastination, especially when it comes to continuing tax legislation. Year after year after year, most Representatives and Senators agree on the expiring tax laws themselves, but they have issues getting measures enacted to keep them on the books.

Perpetual Congressional lateness in approving these extenders, the technically temporary tax breaks that are renewed for one or two years at a time, is a real pain. Over the years, the delays have led to filing and planning problems, not only for us taxpayers but also for the IRS.

Tax forms have been printed and then reprinted, costing the Treasury (and ultimately us) millions of extra dollars. been delayed while the IRS works to turn late-passed legislation into practical tax-filing action. Worse, we can't officially plan when we don't know whether an action will still be deductible.

This penchant to putting off expiring legislation hit a new low in December 2009, when Congress was unable to agree on a way to keep the estate tax from expiring on Jan. 1, 2010. Now lawmakers will face a battle to reinstate the estate tax retroactively. Good going, Congress … not!

4. Tax fraud and evasion, on and offshore
With all the new tax laws, there are more ways for scofflaws to try to cash in.

That became embarrassingly apparent with the repeatedly tweaked first-time home buyer credit. Egregious cons were put over on the IRS in connection with this tax break, including the now legendary tale of a 4-year-old first-time home purchaser.

That law was not alone in being problematic for the tax agency. The Treasury Inspector General for Tax Administration (TIGTA) recently found that the IRS is unable to verify taxpayer eligibility for the majority of the American Recovery and Reinvestment Act's 56 tax breaks when the return claiming them is processed.

Meanwhile, the oldie but goodie of using offshore accounts to hide money from the IRS came to a head in 2009. In this case, however, the IRS had more success, finally getting some cooperation from Swiss banking officials. Plus, the IRS amnesty offer resulted in almost 15,000 offshore account holders coming clean.

5. Administration tax issues
I'm not talking about tax policy, but rather the difficulty in getting people into top government jobs because of their personal tax troubles.

Compliance with the Nanny Tax has been an issue for many administrations. To the list of Zoe Baird, Kimba Wood and Linda Chavez, we added in 2009 the name of Nancy Killefer, whom Obama wanted to fill the new Performance Officer position. No such luck thanks in part to a Nanny Tax no-no. 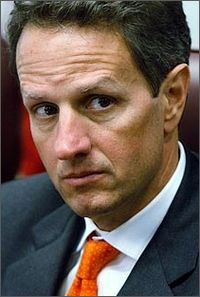 But the biggie was U.S. Treasury Secretary Timothy Geithner's problems in correctly reporting self-employment taxes on income paid by a foreign employer. He intimated it was TurboTax's fault, but we all know tax garbage in, tax garbage out.

Plus, Geithner, and every taxpayer, is ultimately responsible for what is or isn't on a 1040, regardless of how the return is completed.

Geithner at least survived his tax goof, but the underlying lesson of these latest tax troubles encountered by Administration appointees is that the tax code does indeed need some serious work. I'm not going to incur your derision again (see #2), by suggesting that this is going to happen any time soon.

State taxes provide a baker's dozen: While federal taxes consume most of my (and probably your) time, we taxpayers also must contend with state revenue departments.

Almost every state in recent years has had a very hard time making its revenue meet its needs. So as a bonus top tax issue, I must include the states' fiscal crises.

One word pretty much sums this issue up: California. Heck, even Arnold found himself in personal tax trouble!

But the Golden State isn't alone. Most states are struggling financially. That means they are looking for any and every revenue option, from collecting on out-of-state companies who do business within their borders to taxing medical marijuana to simply ramping up enforcement efforts.

Many listers, lots of duplicates: As I was drafting this post, many of my tax blogging colleagues were doing the same. Not that we're monolithic or anything, but you'll see a lot of the same tax topics on all the lists. Just goes to show that great minds do think alike.

The venerable Tax Foundation issued its list of the top tax stories of the decade. They are:

At The Tax Lawyer's Blog, Peter Pappas offers his take on the decade's tax laws of note.

Robert D Flach of The Wandering Tax Pro narrowed his focus to last year. Even then, though, he needed two posts to look back at the 2009 tax year, Part 1 and Part 2. He also reviewed some interesting 2009 tax rulings.

And from a wider legislative perspective, Congress.org took a look at more than taxes in its decade review. However, its Ten notable bills of the '00s is bookended by tax bills, starting with Dubya's tax package in 2001 and ending with Obama's first stimulus, the American Recovery and Reinvestment Act of 2009.

Now let's hunker down and see what top 10 in taxes that the 10's will bring us.