The best way to pay for war

Sixty-eight years ago today, the Japanese attacked the U.S. Naval base at Pearl Harbor, Hawaii.

The next day, following President Franklin D. Roosevelt's "a date which will live in infamy" speech to the nation, the United States formally joined World War II. 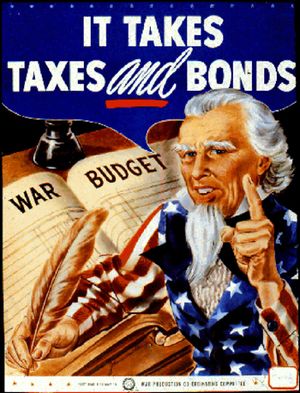 WWII is often referred to as "the last good war." Wordsmiths and philosophers can debate the phrase, but for most of us it essentially means that WWII was the last military effort in which there was consensus about American involvement.

That widespread public support also made more palatable the associated sacrifices by those who weren't on the front lines.

In all wars, the sacrifices of families who send spouses and children to fight are obvious. But for the rest of us, the only affect war usually has on us is via our pocketbooks. And that monetary factor, in the form of taxes, is rarely as clear-cut or acceptable as the battles themselves, which are packaged as patriotic necessities.

Good war, good taxes: In the article Sacrifice and Self-Indulgence on the Home Front in today's Tax Analysts, Joseph J. Thorndike notes that WWII "gave rise to the purest version of fiscal sacrifice in American history. In the face of 'total war,' lawmakers agreed to a series of dramatic tax increases."

Between 1939 and 1945, writes Thorndike, tax exemptions were cut and income tax rates were raised dramatically across the board.

In addition, a "victory tax" was created. This flat 5 percent levy on "victory tax net income" allowed fewer deductions than the regular income tax and, by broadening the tax base, "introduced 13 million Americans to the joys of income taxation."

While we've sent our soldiers and sailors into battle since, we've not seen anything like the WWII tax support.

The reason? "It's hard to sell the tax before you sell the war," says Thorndike. "Unpopular wars have been the occasion for most departures from the tradition of fiscal sacrifice -- present wars included. "

Thorndike's piece in today's Tax Analysts is available only to subscribers, but he has written about this topic repeatedly in the publication's blog Tax.com (Time for a War Tax; Finally, Some War Tax Talk; Gas Tax for the War?; and Ben Nelson Needs a History Lesson.)

War taxes circa 2009: Today, as Obama prepares to send more U.S. service men and women to Afghanistan, there's been talk of a war surtax to finance that effort.

That's not going to happen.

House Speaker Nancy Pelosi (D-Calif.) last week announced she would not support a proposal to create a war tax. Other House leaders, as well as Senate Majority Leader Harry Reid (D-Nev.) already had come out against such a tax.

Still, the concept deserves some examination.

In The Awful Politics of the War Tax, Thompson writes:

"A surtax on the top five percent of tax payers wouldn't be a shared sacrifice. It would be the highest percentiles paying for a war effort fought mostly by the lower percentiles, which is, it turns out, essentially what we have already. A broader-based war tax would go further toward this idea of 'shared sacrifice.' But in the aftermath of a recession, a broad-based tax increase is almost certainly out of the question -- not merely among conservatives, but among moderates and liberals who don't want to burden the fragile job market."

Today, as we remember the attack on Pearl Harbor and our men and women in uniform, whether in combat zones or other deployments, keep in mind the total human and fiscal costs involved in maintaining our armed forces.

Are you willing to pay more to support military actions? If so, which form of tax would you prefer, a targeted surtax, a broad-based temporary tax hike, a special excise tax, a national sales tax dedicated to special expenditures?