Not only does the hubby read the ol' blog, he acts on its suggestions! Sometimes. 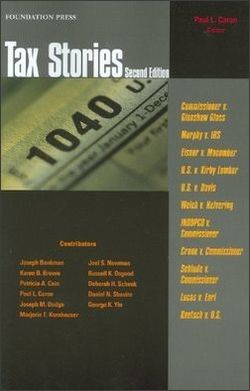 One of my Christmas gifts yesterday was Tax Stories, the book edited by TaxProf Paul Caron. I had mentioned it in my Holiday gifts for tax geeks post earlier this month with a parenthetical note to my sweet spouse.

In addition to editing the publication, Caron wrote Tax Archaeology, in which he concludes that the problematic results in the book's 10 Supreme Court federal income tax cases underscore that "perhaps the fault lies…in our income tax itself."

"Instead of chastising the lawyers and judges for consistently supplying the wrong answers, we should direct our fire at the Congresses and Administrations that created a tax system that inevitably asks the wrong questions," writes Caron. "Until fundamental reform of our income tax becomes more than a chimera, Tax Stories will remain without a happy ending."

In addition to that rousing intro and intriguing chapter titles such as "A New Front in the War on the Income Tax," "The Use (and Misuse) of the 'Ordinary and Necessary' Test for Deducting Business Expenses" and "How a Widow's Misfortune Led to Tax Shelters," I was pleased to find another of my favorite tax bloggers was a contributor.

Or, as Caron notes in the intro, "Shaviro uses Knetsch v. United States to tell the story of how courts have struggled since the inception of the income tax to draw a line between permissible tax planning and impermissible tax shelters."

If you ask really nicely, I might just let you borrow my copy. After I'm through reading it, of course!