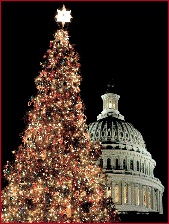 Congress has finally cleared out of D.C. for the year. If we believe the oft-quoted saying, "No man's life, liberty, or property are safe while the legislature is in session," the departure of Representatives and Senators now means we can all breathe a bit easier.

Actually, as this first session of the 111th Congress wound down, we not only had to deal with new laws, but also some legislation that was left undone.

And that means we'll have to worry about what Congress will do with these measures when it returns next year.

House acted, Senate acted up: Overall, the House did a better job of at least getting something done. Whether you like or dislike what Representatives did, at least they passed legislation.

The Senate, on the other hand, got bogged down in bitterly partisan battles that slowed every piece of legislation, with many measures coming to a grinding halt.

Let's look at the scorecard.

Hammering out health care reform
This is the measure that consumed the Senate and resulted in other bills getting pushed aside.

The Senate did pass its version of health care reform Christmas Eve morning, along those previously noted entrenched party lines. But now comes even harder work: merging its bill with the House-passed reform bill.

Senators (or at 60 of them … for now) want to  pay for health care changes with a surtax on high-end "Cadillac" employer-sponsored health plans and an increase in the Medicare payroll tax for wealthier workers. The House bill would rely on a surtax on high-income earners.

And both bodies want to trim flexible spending accounts, those workplace plans where you put in pretax money to pay for unreimbursed medical expenses.

End of extending tax breaks
Several popular tax breaks officially will end on Dec. 31. They include:

The House passed a bill to continue these breaks through 2010. The Senate didn't get around to acting on the extenders.

Death of the estate tax
Everyone's known for years that the federal tax would disappear on Jan. 1, 2010. And most lawmakers agree that there needs to be some form of this levy on larger estates.

Representatives decided to make the estate tax permanent at 2009 levels: a tax rate of 45 percent on estates worth more than $3.5 million ($7 million for married couples).

Some Senators, though, want to expand the estate exclusion amount, and that disagreement kept them from working out a way to extend the estate tax either permanently or on a short-term basis.

Lawmakers promise it will be back retroactively as soon as they can get to it once they return to D.C. next month. I'm not sure I believe them, but don't go throwing momma from the train in case they do get their act together. And mainly don't do it because it's just not a cool thing to do! 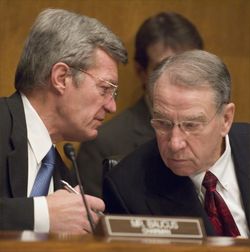 "Although the House and Senate were unable to come to agreement on a package to extend several expiring tax provisions before Congress adjourned, these measures must be addressed as soon as possible," stated the lawmakers. "In an effort to provide a seamless extension of these provisions with the fewest disruptions and administrative problems, we will take up legislation as quickly as possible in the New Year."

In addition, the Finance Committee duo sent a letter to Senate leadership announcing their plan to immediately pursue the extension of the popular tax credits "early in the next year." The plan, according to Baucus and Grassley, is to "extend the provisions without a gap in coverage, just as the House did on December 9th of this year."

And at a press conference, Baucus said that dealing with the estate tax "was critical." No kidding, Sherlock.

The Finance Committee chair also said he would like to see it taken up as part of comprehensive tax reform legislation expected sometime in 2010. Whoa, up there, cowboy. On the heels of health care reform, I don't see a major tax code overhaul in the offing.

Instead, why don't you guys just plan to deal with the immediate issues next session and then broaden your tax scope after those are done.

Quote source: In case you've been wondering who gets credit for the quote that opened this blog item, that old saying has been attributed to Mark Twain, but most folks think he borrowed it from Judge Gideon J. Tucker.

Of course, we've also got to acknowledge the many variations uttered by countless taxpayers not only about the denizens of Capitol Hill in Washington, but also their local lawmakers.