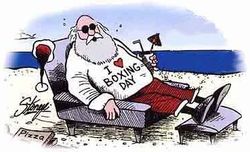 Today is Boxing Day, a holiday celebrated in the United Kingdom, Australia, Canada, Germany, Greenland, New Zealand, Hong Kong and, according to Canwest News Service on Canada.com, countries in the Commonwealth of Nations with a mainly Christian population. In South Africa today is a public holiday known as the Day of Goodwill.

Dec. 26 also is St. Stephen's Day. He is celebrated for giving money to the poor, so one theory is that Boxing Day originated in his honor because it traditionally was the day that churches opened their boxes of alms and gave them out to the poor.

Another origination explanation is that the holiday began in the British Isles in the Middle Ages when wealthy landowners distributed goods, such as things like dried fruit which back then was considered a luxury, to their dependents.

By Victorian times, on the day after Christmas wealthy people would give their servants time off and also paid bonuses then. That tradition still exists today, with Boxing Day is considered the day for people to give tips to mail carriers, doormen and others.

Deductible donations: The closest thing we have in the United States is Dec. 31. That's the deadline day for giving to charities so that the gifts are tax deductible.

Just make sure you follow IRS rules so that you can get full tax benefit for your donations.

First, the group must be approved by the IRS. Check IRS Publication 78 to ensure the nonprofit meets the agency's standards.

You must itemize to deduct any charitable contributions.

Document your donations. Get a receipt or at least make sure you have a canceled check or bank or credit card record to verify your gift, regardless of amount, in case the IRS asks.

Don't donate crap. You shouldn't need Uncle Sam tell you this, but some folks were giving away worthless items and claiming tax breaks for them. Now the IRS can disallow such tacky donations.

And remember that you don't have to wait until the last day of the year to give to your favorite nonprofit. You can give year-round and write off the donation, if it meets the requirements, on that year's tax return.

Thanks for the information. So for those that participated in the cash for clunkers program, that was the only way to get reid of a beast. What suggestions for those with a non-runnable in the driveway?