Yes, Virginia, there is an election today

Actually, Virginians don't have to be reminded that it's election day. The Old Dominion has one of the most-watched off-year races, its battle for governor.

The other hot races are in New Jersey, also the governor's spot, and the 23rd District of New York, where the Conservative Party's vanquishing of the traditional Republican candidate is already giving that group reason to celebrate. We'll see if they're still happy after the polls close tonight.

Here in Texas it's issues rather than people that are dominating the ballot. We have 11 Constitutional questions that must be decided by the voters.

Unfortunately, because of the lack of political glitz and perverse appeal of negative campaign ads, very few of us today will determine which issues pass or fail.

"Yes" for 4: So let me get my personal plug in here now. My fellow Texans, when you vote today, support Proposition 4.

Prop 4 would let seven schools, including my alma mater tap into a half-billion-dollar fund to help them become research universities.

It's not going to cost you any tax money. The cash is already in the Higher Education Fund, created years ago to aid campuses, but it has sat dormant. Today's vote for Proposition 4 would establish the National Research University Fund and allow eligible schools to access the current $500 million sooner as long as they meet required standards.

And it's not just academia that will benefit. With more research being done in Texas, more companies will likely consider moving here, bringing jobs with them, to take advantage of it.

The state House and Senate unanimously approved the measure, but our Constitution requires we voters give it the final OK. So please, vote today and vote for Prop 4.

Politics, schools and tax breaks: Governments have always been involved in schooling. Standards are set and policed.

And tax breaks have been offered so that more kids (and adults) can get and/or continue to improve themselves and their skills.

Below is a look at some of the federal tax breaks that students and their parents can use to make sure young Jimmy and Janie get the proper book learning.

For the 2009 and 2010 tax years, the new American Opportunity Credit tweaks the existing Hope Credit. 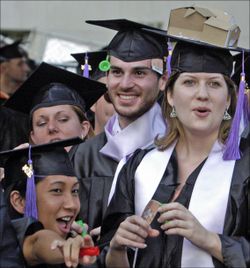 The new credit is worth $2,500 per student, based on the first $4,000 of qualifying educational expenses. The Hope Credit only allowed for an $1,800 tax break.

In addition to upping the credit amount, the American Opportunity Credit can be claimed for expenses for the first four years of post-secondary education, versus the first two years of expenses allowed under the Hope Credit.

The American Opportunity tax break also is available to more folks than was the Hope version. This means more taxpayers who make more money qualify; the full credit is available to filers whose modified adjusted gross income is $80,000 or less; $160,000 or less for married couples filing a joint return.

And it's partially refundable, meaning that those who owe no tax still could claim it and get some money back from Uncle Sam. The refundable portion is 40 percent of the credit, up to a maximum of  $1,000.

The list of qualified expenses also has grown. In addition to the standard tuition and required school fees, students now can count the cost of required course materials, such as books, lab supplies and computer software.

Special rules also apply to students attending college in a Midwestern disaster area. For tax-year 2009 only, taxpayers can choose to claim either a special expanded Hope credit of up to $3,600 for the student or the regular American Opportunity Credit.

Lifetime Learning lives: The other widely-used educational credit, the Lifetime Learning Credit, remains on the tax books as is. This tax break can be claimed for 20 percent of your first $10,000 in qualified education expenses, up to a maximum of $2,000. This credit is available for all four years of college, as well as post-school training, and can be claimed by part-time as well as full-time students.

Students attending an eligible institution in a Midwestern disaster area in 2009 get an added break. They can claim a maximum Lifetime Learning Credit of 40 percent of their first $10,000 in eligible expenses, or up to $4,000 per return.

Pell Grants, 529 plans enhanced: Also as part of the ARRA stimulus, the maximum amount of a federal Pell Grant, demand for which has increased during the economic downturn, was increased. Eligible students in the 2009-10 school year can get a $5,350 Pell Grant award.

As for 529 college savings plans, which afford students and families a chance to pay for educational expenses without any tax worries, the new stimulus bill expanded the list of college expenses that can be paid for by such a plan.

For 2009 and 2010, the definition of qualified higher education expenses includes expenses for computer technology and equipment or Internet access and related services as long as they are used by the designated beneficiary of the 529 plan while enrolled at an eligible school.