I've blogged repeatedly about the dire financial straits most states find themselves in nowadays.

Colorado's Attorney General John Suthers has informed Gov. Bill Ritter that, yes, the state does have the authority to tax medical marijuana. "Medical marijuana is tangible property that is generally subject to state sales tax," Suthers wrote in his Nov. 16 formal opinion.

The legal analysis was in direct response to a query by the governor, and was issued just as Denver was about to impose its own sales tax on medical marijuana. That will happen on Dec. 1, with Denver dispensaries required beginning that day to pay the city's 3.62 percent sales tax.

Denver's new tax source is estimated to generate up to $15 million for the state and up to $45 million in city and community taxes.

Money trumps ideology: Not only is the decision to tax medical marijuana potentially a major revenue raiser, it also marks one of the few times in these politically polarized times that folks on both sides of the aisle have come together.

AG Suthers is a Republican. Governor Ritter is a Democrat. And it doesn't stop there.

Is it just me, or is anyone else picturing all these politicians, now united by marijuana taxes, sitting in the Foreman's smoke-filled basement in Point Place, Wisc., and having a grand old time?

Or, as Laura Chapin put it in U.S. News' Thomas Jefferson Street blog, "Conservatives clapped their hands over a new revenue stream. Liberals are happy that people who are sick and need help will get it. And a cash-strapped state may have found a way to relieve a bit of its budget crunch." 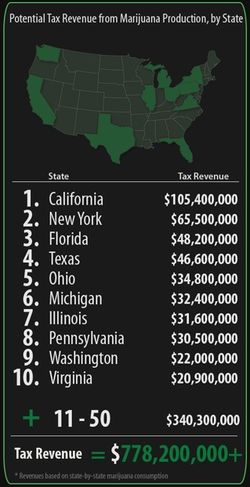 Huge revenue potential: If the Colorado marijuana tax plan works, you can bet the other states that allow medical marijuana sales will soon have their own tax rules in place.

The Golden State began collecting sales tax on medical marijuana after the state Board of Equalization determined that because weed did not meet the legal definition of medicine, it was subject to the tax.

In 2007, California tax officials "urged" medical marijuana retailers to get a seller's permit like other retailers.

Now an estimated $200 million in medical-marijuana sales are subject to the Golden State's sales tax of 8.25 percent, yielding about $16.5 million in revenue annually.

It hasn't stopped there. This summer, Oakland became the first U.S. city to tax proceeds on medical marijuana.

More marijuana tax money to be made? What about the states where there is no provision for medical marijuana? In those cases, lawmakers might want to consider regulating and taxing the nonmedical weed.

As the graphic above (excerpted from a larger display created by Sloshspot and shown in full on Brand X) indicates, that could yield more that $778 billion. The revenue potential is attracting attention.

Again we go to the Left Coast.

When the California Assembly meets in January, it will consider lifting its 96-year-old ban on marijuana, decriminalizing the drug and taxing it like alcohol as a way to help pull the state out of its worst financial crisis since World War II.

The state's Board of Equalization (BoE) has crunched the numbers. In Oct. 28 testimony before the California Assembly Committee on Public Safety as it examined the fiscal and legal implications of legalizing and regulating marijuana, Robert Ingenito, Chief of the BoE's Research and Statistics Section, told lawmakers:

"Under current law, retail sales of marijuana and any other drugs or medicines sold without a prescription are subject to sales tax to the same extent as any other retail sales of goods. We have estimated that the potential state and local sales tax gain could be as high as an additional $392 million, $263 million of which would be General Fund. Thus, the total revenue increase from a hypothetical $50 per ounce tax could be as high as about $1.4 billion."

Whatever one's stance on legalizing marijuana, those dollar amounts are impressive. And they just might be persuasive enough in this tough economy.

"No matter what sort of spin you put on the issue, ignoring the revenue-creating potential of taxing cannabis sales -- which will continue, legally or otherwise -- hardly seems prudent when we live in an era in which local governments can't afford to fix potholes or hire schoolteachers," writes Brand X's Richard Metzger.