With Halloween just a day away, it's time to find out what scares you the most. When it comes to taxes, we have a terrifying tale from the Midwest.

Iowa lawmakers created a tax credit to lure movie crews (and revenue) to the state. But it has played out as a much more horrifying scenario than any fake gore on the silver screen.

Hawkeye State residents watched in shock and dismay as their attorney general launched a criminal investigation into the credit. The state's top lawyer is trying to recover millions of tax dollars that may have been wrongfully paid to movie production companies.

The Iowa program, which began in 2007 and is now on hold, was one of the most generous film tax credits in the country. A 50 percent credit was offered on qualified production expenses. Twenty-two projects took advantage of the offer.

And "take advantage" is the operative phrase.

"Approximately $32 million in tax credits have been issued, and we will review them in detail and seek recovery wherever they were obtained in violation of the law," the attorney general’s office said in a statement announcing the investigation.

Preview of coming bad attraction: But a fellow tax blogger saw what was coming in this script months earlier.

While buying and trashing old cars and subsidizing filmmakers may seem very different, they actually are similar in important ways. They illustrate that politicians take the shocking phenomenon that people will line up for free money as proof that a program is a success.

Joe also followed up on Iowa's questionable investment in film and its cost to each Iowan. It comes to a bit more than a matinee at the local cineplex.

Some states aren't afraid: State tax credits for filmmakers, however, still have supporters. They point to the added boost local economies get from movie projects, usually by hiring locals, although the math there is sometimes fuzzy.

Still, the lure of the silver screen -- just like opening that door in the dark house in a horror movie -- is strong.

Even facing budget catastrophe, California kept its tax incentives as a way to fight back against other states trying to lure television and movie producers.

Santa Fe, N.M., county has agreed to foot much of the bill to get more cameras rolling in that part of the Land of Enchantment.

And in my neck of the woods, the Texas Motion Picture Alliance is holding a Halloween Day luncheon workshop about making movies in the Lone Star State, including advice on getting tax incentives for doing so.

Movie makers beware: In some instances, it's the Hollywood types who run into problems.

There are a few requirements of the production companies. And some jurisdictions that offer tax breaks actually make sure you follow the rules.

Here in Austin, where the high school football drama Friday Night Lights is filmed, the city is taking back some of the tax money it originally awarded the program.

I am a big movie and TV fan, and I get a kick when I see scenes in places that are in my state or hometown. But in these tough times, governments better make sure that the filmmakers tax credentials are bona fide.

Scary movies: If you're too old to trick or treat, you likely will be at a Halloween party or, my choice, home watching a scary movie.

As you can see from the poll below, I'm a fan of older horror movies. The psychological scare is more frightening in my opinion than most of today's special effects gore. But to each his or her own. Take the poll and tell me why your choice is more terrifying than mine. 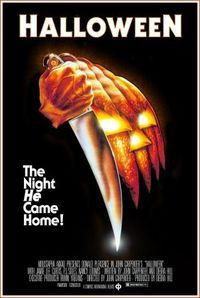 My selection? The original "Halloween," with the creepy silent version of Nosferatu a close second.

Heck, why choose? I'll just have a DVD double feature this 31st!

The 1978 John Carpenter classic -- the chilling theme song alone, which Carpenter composed, is enough to grant it admittance to the horror film hall of fame -- also made USA Today's list of best Halloween DVDs.

If you don't have your favorite horror film on DVD or tape, check out Huluween, the online site's collection of its scariest videos.

One of the scariest moments in film for me (when I saw it in the theatre) was WHEN A STRANGER CALLS (the original, of course) when the babysitter is told the killer is in the house. The movie sought of fell apart in the 2nd half.

You don't need blood and gore to be scary.