Just a quick note to let you know that today's posts, in particular the second edition of Tax Twitter Tuesday, will be delayed a bit. 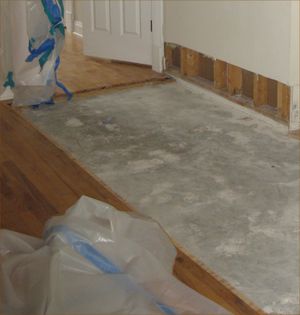 We've been living with much of our hardwood flooring and drywall gone for several weeks. There to the left is a photo of a small area of what I've been stumbling over for the last few weeks.

Then we had to move most of our downstairs belongings upstairs to facilitate repairs.

But at least all out stuff is still under one roof. Very cozily under, but together nonetheless.

Today the repairs to our home's water damage itself, as well as the demolition afterward to dry the place out, began. That meant, being an obsessive-compulsive nester, I spent the morning and early afternoon hovering over the first work crew. They certainly looked relieved when I said I had to head upstairs to do some work of my own.

So I'm just now getting in gear. But I will get the job done under these less than ideal circumstances.

I'm keeping my fingers crossed that the same is true for the guys making a lot of noise downstairs!

Real disaster relief: My heart goes out to folks who've suffered through much worse disasters. Thank goodness, we've had a pretty quiet storm season this year. But as weather forecasters say, it only takes one.

If you do endure a natural catastrophe, you could get special tax treatment if it's an event that's declared a major disaster. Changes to the added tax calculations that must be made in these cases were included in the National Disaster Relief Act of 2008 and apply through the 2009 tax year.

Even if your disaster is not at the hands of Mother Nature, you still might be able to get some tax relief in the form of a casualty loss claim on Schedule A.

In Publication 547, Casualties, Disasters and Thefts, the IRS defines a casualty as the damage, destruction, or loss of property resulting from an identifiable event that is:

Yep. I think the water heater blowing out counts.

In our case, insurance is covering the bulk of the repairs so we don't need to turn to Uncle Sam for help. But if you don't have coverage, or not much, you might be able to claim a loss on your tax return.

I hope you never have to do so. But it's always better to be prepared, since when a sudden, unintended or unusual event occurs, you have enough other stuff to worry about.

I know I'm late, but I'm enjoying your blog. I can't wait to read more.

Dan,
Ironic isn't it that two 'canes within three weeks and no interior damage to the house. One water heater blows out and 3/4 of bottom floor is toast. Four of five rooms (and foyer) downstairs have same type of wood, which is nailed down hardwood so more elaborate installation (and demolition), so floor guy was going to redo all them anyway to ensure match. But when we moved furniture out of dining room yesterday learned that the water had seeped down the hall from kitchen into there. Water stain on bottom of rug and warped boards underneath it. So the replacement is totally necessary. Hoping to have it done by January. Then, I promise, we'll have y'all over!

And yes, the floor was a major selling point for me, so it must be redone properly!

Egads, Kay, I didn't realize it was that bad. My sympathies. From our Florida post-hurricane days, I recall how poorly you and working in a water-damaged building mix.

And for it to ruin hardwood floors? Fie on that water heater. I know hardwood floors are inanimate objects, but for the homeowners I know who have installed them, they're at the top of the "I care about this" foodchain, ranking just below pets.