That headline is correct. The official name of these country club vehicles is golf cars, not carts.

And the distinction comes in handy under a tax credit for all-electric vehicles.

You might have seen the feature on the golf car tax break this morning on ABC's Good Morning America (story transcript here).

But the tax credit has been around for months, precisely almost 13 months. It was part of the financial services bailout bill enacted Oct. 3, 2008.

Under the Bush administration's Emergency Economic Stabilization Act (you know the law, the one that also included the arrow shaft tax break), the purchaser of a plug-in electric motor vehicle could get a tax credit of at least $2,500. The tax savings could be more depending on the vehicle's battery.

And yes, the Obama stimulus, officially known as the American Recovery and Reinvestment Act (ARRA), that became law on Feb. 17 also had an electric vehicle provision.

ARRA's tax credit is designed for Low Speed Vehicles or two- or three-wheel electric vehicles such as motor scooters. This credit is 10 percent of the cost of the vehicle,  up to a maximum $2,500. Qualifying vehicles here must be bought between Feb. 18, 2009, and Dec. 31, 2011.

Street, not cart path, please: But the carts, I'm sorry, cars you see tooling around the local golf course's back nine don't count when it comes to the either the Bush or Obama electric vehicle tax credit.

The tax break is only available for neighborhood electric vehicles, or NEVs. That's the word from the IRS, which this summer announced that NEVs bought in 2009 for cruising neighborhoods, typically at top speeds of 25 miles per hour, qualify for the tax credit.


These small vehicles, a couple of which I've seen in my northwest Austin suburb, are street-legal. That means to qualify for tax credit consideration they must include federally-mandated safety features such as headlights, seat belts, parking brakes and driver's side mirrors.

Credit connected sales surge: Golf car/NEV sellers are making good marketing use of the tax credit. Many dealers report skyrocketing sales after they started publicizing it. 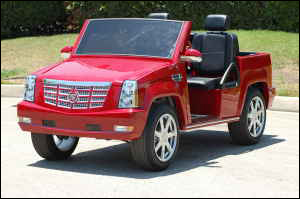 Even direct sellers, such as the guy who's offering this red 2009 Cadillac Escalade NEV on Craigslist mentions the tax credit at the top of his ad.

Personally, I'd never buy a Mini, so there's no way I'd pay for a souped up golf cart, car, whatever.

A NEV wouldn't even work for me in our neighborhood. We have a couple of steep hills I'm not sure the vehicle could maneuver. More to the point, I've seen how some of my neighbors drive!

But if you find most of your daily driving is in an area close to your home -- and your jurisdiction allows them on the road -- and you can deal with an open vehicle most of the year, you might want to think about a NEV. The Hummer version is pretty nice, too, without all the fossil fuel guzzling of the original.

Golf car politics: As you might expect, avid political types have jumped on the golf car tax credit as evidence that [insert the name of the party you oppose here] can't be trusted to develop sound fiscal and tax policies.

TaxProf Blog highlighted the argument last week. Given the political atmosphere in the U.S. right now, don't look for this, or any tax-related debate, to end any time soon.

Golf car here shown are very much amazing one. I like the most of red color. It looks like the Jeep.

That seems not a Golf car looking vehicle... I never see any golf car like that until I visit this post... well not bad... Ride Safe!