Baby formula is not deductible 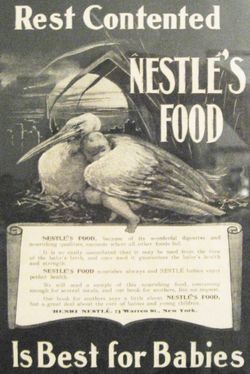 Having a baby, so I'm told, challenge. The mothering concerns of one woman were intensified when, because of a double mastectomy, she was forced to turn to infant formula to feed her child.

In the hopes the tax code could help somewhat, she sought to deduct the formula cost, which could be substantial. I'm not a mom, but I used to work for Nestlé and saw how much money that division made. (The photo to the right of the company's 1901 Scribner's magazine ad is from my personal collection.)

Alas, the IRS said no. The formula is properly considered food for the baby, and therefor isn't an allowable medical expense for the mother.