Blogging and other work-related duties will be delayed today as I deal with the aftermath of a leaking water heater. 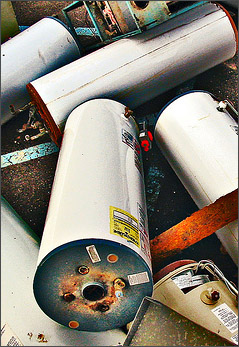 Making matters worse is that the damn thing is in our attic.

I know. That's apparently what the builders do here in the Austin area. Put things that can leak, like water heaters and A/C handler overflow pans, in the attic. Over rooms and clothes-filled closets.

Not a smart idea, guys. Not smart at all. I'd rather give up some garage space so that leaks happen in areas where they are not so problematic.

But no such luck.

The water heater let go while I was out taking my morning walk, which I had delayed a bit to let a shower pass.

When I returned home, it sounded like it was raining in my kitchen. And it was. Don't you just love irony? I used to.

After leaking through the attic floor, along an upstairs door frame and then into a first floor door frame, the water dripped through the first floor ceiling plaster and poured from light fixtures and an A/C vent onto our kitchen's hardwood flooring.

Every towel we own is soaked, but at least a plumber is here assessing the damage and, I hope, soon replacing the dang thing. Then we'll deal with the insurance company and the water damages.

And, another hope, I'll get to wash the soaked towels and take a shower before the day is done.

Until then, I damply wait here in my home in Central Texas, where despite random rain showers, we're still suffering through a near-historic drought. And my house now has water damage.

Men design houses with water heaters and ac overflow pans in the attic. Women know better. Also, what about flush light fixtures mounted on two story ceilings? A woman would never, ever go there.

Dang! Some people just have all the fun. BTW, my water heater is in the garage.

Thanks, Joe. It's nothing compared to the floods y'all had a while back, but I still reserve my right to complain! It's sounding like the plumber is about done. Fingers crossed!
Kay

Lose a water heater, gain a blog post! I hope you are dried off and well-supplied with warm water soon.