Gas taxes: Alaska's is back, others up

How's your Labor Day holiday going? If AAA is correct, fewer of us are on the road this year, primarily because the 2009 long weekend fell after most schools started.

The hubby and I are sitting at home not because of school (we have no kids), but because we are lazy. But that's another blog post (or not).

If you, however, are more energetic and are in the midst of an end-of-summer road trip, you're probably paying less for your gas than you did last Labor Day. AAA says the 2009 nationwide average price of self-serve, regular gasoline should be around $1 per gallon less expensive than it was one year ago, or about $2.60 per gallon.

That pump price estimate probably holds up here in the lower 48. I filled up my Cavalier last week for $2.49 a gallon.

But Alaska drivers are paying a bit more. AlaskaGasPrices.com's Sept. 5 survey of gas prices found that per gallon charges ranged from $2.79 in Ketchikan to $3.87 in Cordova.

Fuel tax is back: Part of the reason for higher pump prices in oil-rich Alaska is that on Sept. 1, after a year of no gasoline taxes, the state started collecting fuel fees again.

Like other states, Alaska uses fuel taxes to pay for road and aviation maintenance. The per gallon taxes in the Last Frontier include 8 cents on gasoline; 5 cents on marine fuel; 4.7 cents on aviation fuel; and 3.2 cents on jet fuel.

All of the Last Frontier's fuel taxes had been suspended in 2008 by former governor Sarah Palin back when gasoline prices were topping $4 a gallon. Such action also had been debated at the federal level (remember the presidential campaign rhetoric?), as well as in other states, but everyone else decided to keep collecting the transportation-related taxes.

By forgoing the various fuel levies for 365 days, Alaska lost around $45 million. Now that revenue is being made up with the resumption of the fuel tax collection.

Politicking wins out: The revenue potential, however, is apparently less important to the state's new governor than political posturing.

At a pump press conference on Aug. 31, the last day the gas tax suspension was in place, Gov. Sean Parnell called for a reinstatement of the no-tax waiver.

"I'm interested in giving Alaskans a break at the pump," Parnell told television stations as he fllled up his Ford pickup at an Anchorage gas station. "I don't think we need the 8 cents to state government. I think Alaskans can use those dollars in their home budgets."

Parnell said he had asked state lawmakers to continue the suspension when they met in special session in July. Legislators refused then, but could reconsider when they reconvene in January.

Fuel taxes nationwide: What does your state get when you hit the road?

The API map below indicates the country's various gasoline tax levels. Red states have overall gas taxes more than, and in some places much more than, per gallon. Yellow state taxes are between 40 and per gallon. Blue states collect less than per gallon of gasoline. 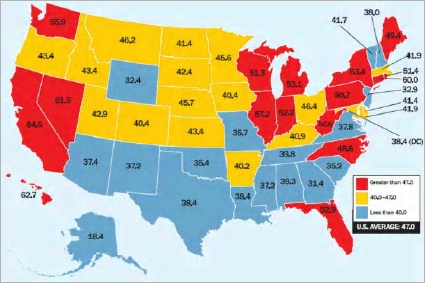 You can click on the map for a larger version (or here if you're reading via feed and the map doesn't display).

Part of the 47 cents average is the federal gas tax of 18.4 cents per gallon. In addition, other taxes (such as applicable sales taxes, gross receipts taxes, oil inspection fees, county and local taxes, underground storage tank fees and other miscellaneous environmental fees) also are taken into account.

In addition to colorful maps, API also provides a summary of and notes on fuel taxes nationwide.

Getting what our taxes pay for: Everyone always complains about taxes, but do fuel taxes really affect how much we pay at the pump? "No," says Dermot Cole at Newsminer.com.

There is strong evidence that changes in retail fuel prices are driven by demand and changes in the state’s fuel tax rate may only affect who captures the increment of profit from the retail sale of a gallon of fuel: the State, the gas station, the distributor, the carriers, the refiners, or the producers.

The data indicate that the suspension of the State's fuel tax did little to reduce the retail price of fuel and any temporary effect was quickly overwhelmed (by) market forces.

Even more telling was an Alaska Department of Transportation survey that found almost 67 percent of respondents said state funding for roads -- we're talking fuel taxes here -- should be increased.

The bottom line with fuel (and other) taxes is that if we can see what's in it for us -- in this case, better transportation systems -- we're less likely to complain about them.

Allen Madding at Insider Racing News says he constantly hears from folks who think that if they could get some of that NASCAR juice, they could leave every other driver in the dust. Not so,

"High-octane racing fuel in and of itself does not make a car faster, and it does not produce higher horsepower," says Madding. "Octane is simply the ability to resist detonation."

And even if Sunoco 260 GTX 98-octane racing gasoline was available at every one of the brand's gas stations, says Madding, we'd probably pass on filling up our cars with it since sells for more than $9 per gallon.

No word on whether that price includes fuel taxes.

September's racing rants: My Crazy Woman Driver column this month for Truckers News and Changing Lanes, Randall-Reilly Publishing magazines, is not about taxes, but about how Sprint Cup drivers tax the patience of the Nationwide and truck series teams.

In this economy, there's no reason for NASCAR's top drivers to be "claim jumpers," literally taking money out of the pockets of teams in the lower-level leagues.

So butt out, big boys!