I admit it. I'm a sucker for lists. And easy news hooks.

So the first thing that came to my mind on 09-09-09 was the nine states that don't tax wage income.

Everyone probably already knows that my native state, Texas, along with Alaska, Florida, Nevada, South Dakota, Washington and Wyoming don't have any income tax at all.

But two others also don't tax wage income. They are New Hampshire and Tennessee.

However, the Granite and Volunteer States do collect taxes on the dividends and interest their residents earn.

State tax luck runs out: Folks who live in a state with some type of income tax are always telling me how lucky I am to not have to worry about filing a state return, too.

Well, the hubby and I used to be lucky in this regard. Then he started getting money from a Georgia-based company. So now we file a Georgia nonresident tax return each April.

That's right, Georgia's tax law says that if you get money from a Georgia source, you most likely owe the Peach State taxes on that income.

Several states have similar income source laws. The most notable one is New York, whose aggressive taxation of telecommuters is held up as the standard for how to get money from nonresidents.

The costly bottom line is that in many cases, even if you live in another state, when you get money from a payer in a state that taxes source income, you owe that other state's tax collector.

And as more folks become freelancers, working electronically for companies based all over the country, their tax filings become very complicated, not to mention expensive.

Even worse, if you live in a no-income-tax state, you're doubly screwed. Most states with state income taxes allow you to credit state income tax payments you made to other states against the amount your paid to your actually-lived-in home state.

But in Texas, for example, we have no state income tax to offset the amount paid to another state. We just lose that tax money.

You can ignore these state tax laws. I certainly understand the temptation to do so. But you could end up causing yourself even more tax problems.

When the tax officials in the employer state find out you haven't filed a return with them -- and they will eventually -- you'll owe the state tax you didn't pay plus penalties and interest. 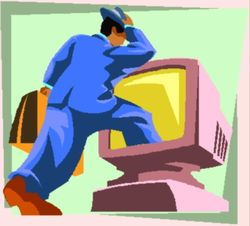 Tax laws need to keep pace: As the world and its workplaces change, more of us will be working for bosses in faraway places.

Many of us will get jobs as contractors when companies that downsized during this recession decide they like having virtual employees instead of occupants of dreary cube farms.

The issue of telecommuting also makes sense when you look at the fuel and energy savings such arrangements could produce by keeping more people off the roads.

But there are those nasty taxes on telecommuters. And you can be sure that the collecting states will not let go of that money easily, especially since most jurisdictions are fighting for every last dollar, both within their borders and beyond.

There is some hope things might change for the tax-better for telecommuters. The Telecommuter Tax Fairness Act has been introduced for years, but as more folks work remotely, the push for its passage grows.

As someone who's paying year-round taxes to a state in which the hubby actually works for a week or less annually, I'm going to keep bugging my federal lawmakers. I hope you'll do the same. Maybe we can finally get this telecommuter remote revolution off the ground.

Until then, though, the best recourse is, when possible, to accept only jobs from employers in your home state or ones that only tax actual, physical resident employees, not nonresident workers.