What with my estate tax post last week, I know you're probably thinking, "What's this morbid kick Kay is on of late?"

But this isn't about what you might think. Death & Taxes is what Jess Bachman calls his annual budgetary art exercise.

Bachman boils down the raw data to give us taxpayers, who ultimately foot the bills for the areas represented in the poster, a much more appealing look at our costs than when they're displayed as rows and rows of numbers. 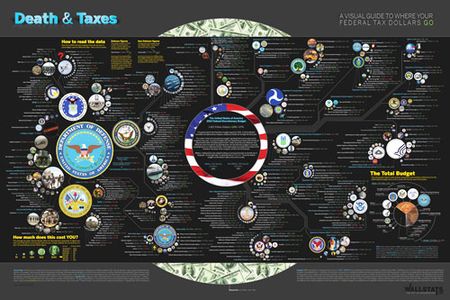 Those numbers change yearly, depending on who occupies the White House, serves in Congress, what's going on across the country (and world) and, sometimes, what we the voters want. This year's poster is of particular interest, not only because of he political changes in Washington, D.C., but also because of the economic downturn.

You can take a closer look at various parts of the poster, including the IRS budget data, via a zoomable version at WallStats.com, where you'll find other examples of Bachman's melding of info and art.

That's also where you can order your own copy of the poster. And no, Bachman didn't ask (or pay) me to say that. I just think it's a cool poster and thought some of y'all might have wall space just crying out to be filled with federal spending artwork.

And numbers nerds, you're not forgotten. Bachman provides the figures he used in his Death and Taxes - data only blog post.