Jackson estate taxes could be 'Bad'

Attorneys now sorting through the estate of Michael Jackson probably have one of the late entertainer's hits ringing int heir ears: Bad.

Bridget Crawford, writing in the Feminist Law Professors blog, notes that publicity comes into play in California in dealing with estates. Why does that not surprise me?

Under Golden State law, publicity is descendible. "This means that a person may transfer by will the right to exploit his or her name, likeness, image, etc., just as one might transfer, say, an heirloom piece of jewelry," writes Crawford.

For the Jackson estate, the value of his publicity very easily could exceed his estate's liquid assets available to pay taxes, says Crawford.

Yep, that definitely could be more than bad.

Attorney Tamera Bennett, who blogs at Current Trends in Copyright, Trademark and Entertainment Law, also takes a look at what happens next to MJ's estate.

Not a new issue: Paul Caron of the University of Cincinnati College of Law -- you probably know him better for his TaxProf Blog -- also examines the estate planning implications of the valuable descendible rights of publicity.

Caron was well out front on this issue. In a 1995 article for Tax Notes, he writes:

"Proper planning for the publicity-shy celebrity may be to impose restrictions on the right of publicity to accord with his privacy interests without subjecting the heirs to an estate tax burden. In contrast, for the celebrity like Michael Jordan who has aggressively exploited his name during life, it may not make sense to impose any restrictions on the right of publicity. The best approach for such a celebrity may be to maximize the benefits to his heirs through an unfettered right of publicity, at the cost of a estate tax bite to be paid for with the fruits of the exploitation."

Jackson's heirs directly affected by his descendible publicity are his three children and his mom.

The late singer-songwriter's will stipulates that his assets be placed in the Michael Jackson Family Trust. Beneficiaries of the trust are Jackson's two sons and daughter and his mother Katherine, whom his will also states he would like to be appointed as guardian of the kids.

Now about those federal taxes: The Economic Growth and Tax Relief Reconciliation Act of 2001 included repeal, incrementally over several years, of the federal estate tax. The phaseout process began for estates of individuals who died between Jan. 1, 2002, and Dec. 31, 2009. 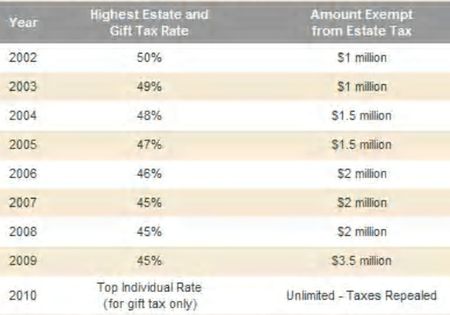 And did you note the 55 percent tax rate cited in Caron's 1995 article? The 2001 law changes that, too. While the amount of an estate that escapes federal estate taxation has been increasing, the rate that apples to the taxable excess has been dropping.

In 2002 the amount of an estate greater than $1 million was taxed at 50 percent. Now the tax on estates worth more than is 45 percent.

And next year, the estate tax is scheduled to disappear entirely. It will, however, be back on the tax books in 2011 in its tougher, pre-phaseout incarnation: on property in excess of

More estate tax changes on the way: That more stringent estate tax, however, won't happen in 2011. In fact, the zeroing out of the tax next year also is unlikely to occur.

Rather, lawmakers are expected this fall to reach a compromise on the estate tax exclusion levels and rates.

Most Washington watchers expect Congress to keep the estate tax at the 2009 level in 2010, rather than letting the law lapse as originally planned. The continuation would keep this year's exemption amount of $3.5 million, along with the current rate.

Some on Capitol Hill are pushing for a $5 million exemption and a slight cut to the 45 percent rate. But since the estate tax laws apply to so few taxpayers and we're facing such ginormous deficits, the smart money is on the extension of 2009 law for 2010 estates.

If you've amassed enough to possibly face the estate tax, this calculator can give you an idea of just how big a bite the IRS might get.

Wow!! Scooped everyone on this one. Great post. Keep up the great work, eh?