Tax audits from Hell for eternity

While catching up on my tax reading this weekend, I came across a couple of reports from the Treasury office that keeps an eye on IRS activities. Admit it. You wish you had my life. 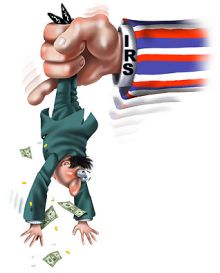 In defense of my free-time reading choices, the studies by the Treasury Inspector General for Tax Administration (TIGTA) were on a topic that morbidly fascinates every taxpayer: audits.

The first report, released on June 17, has some not so welcome news about those incredibly invasive information examinations, often referred to as audits from Hell.

That nickname originated when these random audits first appeared in the 1980s. Back then, they were part of the Taxpayer Compliance Measurement Program (TCMP). But the demonic name stuck because the "measurement" was a very thorough examination of a return, requiring the taxpayer to substantiate every single entry, line by line, and prove each deduction, regardless of how small.

Adding insult to this injury was the fact that the IRS didn't necessarily think those being audited were guilty of any questionable tax avoidance moves. Rather, the agency randomly selected returns so it could get as complete an understanding as possible of the taxpayer filing process.

I could give the IRS a Cliff Notes version of taxpayer thoughts when filling out Form 1040 et al, but I don't think a string of expletives is what the tax agency is looking for.

Tax Hell returns in 2007: These exams returned in October 2007, this time as the National Research Program (NRP).

That month, around 13,000 individual taxpayers were selected for this dreaded honor, with their 2006 returns getting the extra once over. At that time, the IRS said it would continue this "special audit project" for tax years 2007 and 2008.

Now TIGTA tells us "An Appropriate Methodology Has Been Developed for Conducting the National Research Program Study to Measure the Voluntary Compliance of Individual Income Taxpayers."

Yep, that's the report's unwieldy title, but I guess the cumbersome moniker is a perfect fit for the process. And as it indicates, TIGTA says the audits are doing their job.

These last three years of study should provide the agency with good statistical estimates that will improve the compliance and collection process, notes TIGTA.

So, says TIGTA, expect these random audits of individual income tax returns to continue indefinitely. That way, the IRS can further fine-tune the formulas it uses to select returns for audit. The data also will help with new Tax Gap figures.

Billions left on the tax table: Of course, that collection gap could be closed a bit if the IRS did a better job of going after some high-dollar delinquent accounts.

In the June 22 report "Collection Actions Could Be Accelerated on Some Large Dollar Balance Due Accounts," TIGTA says that by getting more aggressive with some taxpayers who owe or more, the IRS could potentially collect more than in revenue.

Now this isn't to say the IRS is letting all millionaires off the hook.

TIGTA investigators found that as of Dec. 22, 2007, there were 2,454 individual taxpayers in the IRS' "potentially collectible inventory" (government speak for "you're on our list, sucker!"), each owing more than a million dollars in taxes, interest and penalties.

Of these delinquent accounts, the IRS was actively going after 2,006 taxpayers for the overdue money.

But the remaining 448 accounts, which were either not being actively pursued or had been shelved altogether, accounted for approximately $1.2 billion.

TIGTA discovered some programming issues that could be corrected or rejiggered to help get these unpaid accounts off the tax back burner. IRS officials agreed with the recommendations. Ya think?

Here's one more idea that might help. Take some of those auditors from Hell and turn them loose on these millionaire tax delinquents.