An interesting question was raised the other day on Moolanomy Answers: Can you have both a 401(k) and a traditional IRA?

The short answer is yes, but check out the full discussion for additional retirement saving whys and wherefores. As you've probably already guessed, I was one of the folks offering my thoughts.

Retirement considerations are always timely. Everyone -- the sane among us at least! -- wants to be able to one day spend time doing what we want, rather than what an employer demands.

Given today's economic and workplace realities, the best, and sometimes the only, way to do that is to contribute to retirement accounts outside your job. So if you don't have an IRA, either Roth or traditional, think about opening one and contributing as much as your budget, and tax laws, will allow.

Roth vs. traditional IRAs: Generally speaking, a Roth is a good account for a younger person. While your contributions aren't tax deductible, when you eventually take the money out to pay for your retirement fun, you won't owe any taxes on it.

Traditional IRAs, however, still appeal to some folks, primarily because the contributions, or at least part of them, might be tax deductible.

As with every tax situation, you need to carefully evaluate your personal circumstances before deciding which IRA is best for you. You can find some tips on making the choice from Cash Money Life, Investopedia, Investing Guide, Green Panda and Get Rich Slowly.

Missing matches: IRAs also are becoming more important because many 401(k)s aren't as valuable as they used to be. The reason? As the economy has worsened, many employers have reduced or eliminated the matching money they used to put into workers' 401(k) accounts.

A recent survey by the global business consulting firm Grant Thornton found that 29 percent of polled U.S. companies have already modified, or intend to modify, the matching contribution feature in their 401(k) plans during the 2009 plan year.

It gets worse. Two-thirds of the companies, or approximately 20 percent of all respondents, say they will eliminate their 401(k) match entirely. 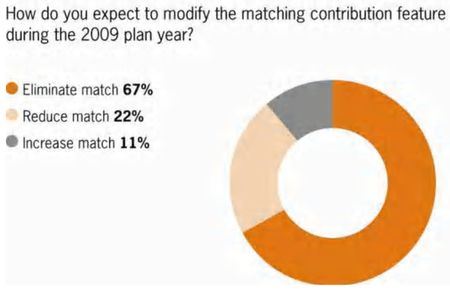 "Clearly, the economic downturn is causing many companies to reevaluate their 401(k) plan design carefully, and in many cases, rethink their 401(k) plan strategy," said Gary Gross, a Grant Thornton LLP Compensation and Benefits executive director and co-author of the survey. "The highest anticipated action reported by all respondents is the complete elimination of the match, which will generate the most cash savings for the plan sponsor."

For company employees, however, it will generate less retirement savings.

AARP also opting out: It's not just businesses that are cutting back on retirement plan contributions.

The largest nonprofit organization for older Americans, AARP, also has decided to suspend its 401(k) match for at least nine months.

"We were not immune to the economic crisis, and we needed to respond as well," David Certner, AARP's legislative counsel and policy director, told the New York Times. "We didn’t take this lightly."

What's your company's 401(k) match position? If you're unsure, stop by your benefits office ASAP.

You can see what other firms are doing courtesy of the Pension Rights Center's list of employers that have downgraded their 401(k) matches.

Also check out the group's tips for keeping track of your pension.

We all certainly hope this trend of cutting 401k matches reverses soon.

That said, some (certainly not enough) 401k plans do have a Roth provision which allows the employee to contribute both pre and post tax.

I think there are valuable reasons to keep your 401(k) going regardless of a match that most people over look:

Very informative article. Without the 401k match (my company dropped it earlier this year), I am planning to focus 1st on Roth IRA. If I can figure out how to contribute to Roth IRA automatically as easily as 401k, then I am all set.