Massachusetts and D.C. are out. Maryland is on hold until 2010. And Illinois briefly considered it, but decided "no." 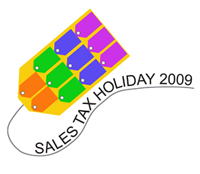 I'm talking of course about back-to-school sales tax holidays. These perennial events offer shoppers a chance to buy certain products -- typically clothing and/or school supplies -- without having to pay the state's sales tax on the items. In many cases, local jurisdictions forgo collection of their additional levies, too.

A tough economy and shrinking state coffers have prompted some locales to abandon, at least temporarily, their annual sales tax holidays.

I'm still keeping an eye on Massachusetts. Last year it sneaked in at the last minute, but Bay State shoppers shouldn't hold their breath this year.

The nation's capital made its no-holiday position official a couple of weeks ago, announcing on the Washington, D.C., Tax and Revenue Web page that "Legislation has been enacted to repeal the District of Columbia’s August 2009 sales tax holiday. The repeal will avoid the loss of an estimated $640,000 in sales tax revenues in the current fiscal year."

No word yet on whether D.C.'s post-Thanksgiving tax holiday will go on as planned.

15 holidays still scheduled: But there still are 15 states whose lawmakers decided that giving up some revenue is at least a good PR move. Plus the states might make a little money or at least break even if people spend more than they intended or buy items that aren't tax-free.

And retailers, although they have to make changes to their equipment to account for the no-tax period (as well as track whether their local tax collectors want them to add the tax to purchases) still seem to like the events. Given that the National Retail Federation's annual back-to-school shopping survey indicates that spending on grade-school-aged children will drop 8 percent this year, businesses are looking for any boost they can get.

Below is a table listing the state tax holidays alphabetically. Most of the August events will start  next week, on Friday, Aug. 7. But a couple of states -- Georgia and Mississippi, holding its first-ever tax holiday -- kick things off later this week.

So pay close attention to the dates and also to exactly what is, and isn't, tax free. The table gives general information, but be sure to double check the official Web pages to make sure you don't inadvertently buy a still-taxable item.

If your state has a tax holiday holiday, or you live next to one and it makes economic sense to drive across state lines to pick up some tax-free products, happy shopping. Just make sure you have a list, buy only what you need and if you charge the purchases, use a credit card with a low interest rate.

Isn't it bad enough that some people have to worry about a job, but now some states aren't participating in this? Things are so expensive and all we want is a little break so we can buy the things our kids need to go to school and get an education. Why is that so hard? oh wait maybe Maryland(where i'm from) is having a meeting on this. They say things are going to get better, but they are getting worse.

Also tax-free in Texas-school supplies, baby clothes, diapers up to $100 per item.

new york state stinks, already the highest taxed in the nation. No breaks for us i guess, Bye Bye western new york!

What, no California holiday? I'm shocked!

Laura,
More than OK. Linking is very welcome! Glad you found it useful and thanks for sharing. Hope you get some good bargains!
Kay

Hi, this is such helpful information. I've linked to this post - hope that's ok!