The House on Friday approved H.R. 2454, the American Clean Energy and Security Act. It's the first ever piece of U.S. legislation designed to curb heat-trapping gases linked to climate change. 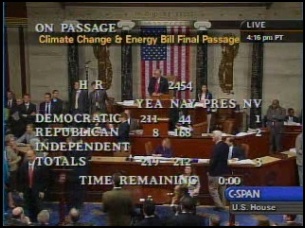 As you regardless of which side of the global warming argument you're on, getting a final bill is not going to be easy. House Democrats were unsure early Friday whether, despite the party's majority, they had the votes for passage. They did, barely.

Now the battle moves across Capitol Hill, where the Senate must approve its own version of energy legislation. Then a House-Senate conference committee will have to resolve the two bill's differences in a manner that will get the joint legislation OK'ed by all lawmakers and in a form that Obama will sign into law

Get ready for more, pardon the pun, heated debate. The close House vote was just the beginning. Judging by the reactions to yesterday's House vote, it will be just as close a call in the ostensibly more deliberative body.

What's it gonna cost me?  Speaking as someone who's just a week into summer and is already fed up with the three weeks (so far) of 100-plus temperatures that are frying me, my plants and my air conditioning system, I'm for any possible help.

But like every other American, I have one big question. What does this bill, at least the House version, mean to my bank account?

The legislation focuses on operational changes for many business sectors, including electric power generation, manufacturing, agriculture and construction. These industries will face a cap-and-trade system that limits overall emissions of heat-trapping gases while allowing certain companies to trade pollution permits with each other.

The system would be phased in over several years, which supporters say should keep costs low. But there will be costs to industry, which will be passed along to you and me.

The Congressional Budget Office says the average American household would pay an additional $175 a year in energy costs by 2020 as a result of the provision. The poorest households would receive rebates that would lower their annual energy costs by $40.

Pre-vote numbers crunched by the American Council for an Energy-Efficient Economy (ACEEE) indicated that the federal energy efficiency provisions in the bill could save each household approximately $1,050 by 2020 and $4,400 by 2030.

Opponents counter that more than 70 percent of Americans will pay higher costs without receiving any tax or other relief under the bill. A family of four with income over $33,000 per year would receive only nominal benefits and no tax credits under the bill to offset its negative effects, according to GOP Ways and Means members who voted against the bill.

Run your own numbers: Of course, these are all just estimates prepared by groups with particular political positions.

For me right now, looking at the thermometer inch toward its predicted high today of 105 degrees, I'd be willing to pay more to have late June temps in the 90s. But we shall see, both what eventually becomes law and what its true costs are.

The Tax Foundation offers some help in our personal energy cost computations. The nonpartisan group has created a Household Cap-and-Trade Burden Calculator to see how much money your household would lose.

The group also has released a cap-and-trade parody video, created by Remy, as well as the working paper "Who Pays for Climate Policy? New Estimates of the Household Burden and Economic Impact of a U.S. Cap-and-Trade System."

The Environmental Protection Agency has put together an analysis of H.R. 2454.

And Earth2Tech provides a good report of what's in the House measure, the vote and opposition arguments.

If we eat better & reduce the amount of farts we lay we won't have this problem.

Here's my burden. If this cap and tax bill passes, my husband and I will have to invest thousands of dollars (we don't have) to bring our old house up to "environmental code" before we sell it. That IS in the bill. I have read it.

We are desperately trying to sell our OLD house before we go into foreclosure. If this passes, we will foreclose. We are poor. We do not have one dollar to invest in new windows for an old house we can't afford anymore. This elitist administration does NOT care about the lower classes.

All I want them to do is leave me alone.

"What's it gonna cost me? Speaking as someone who's just a week into summer and is already fed up with the three weeks (so far) of 100-plus temperatures that are frying me, my plants and my air conditioning system, I'm for any possible help."

"For me right now, looking at the thermometer inch toward its predicted high today of 105 degrees, I'd be willing to pay more to have late June temps in the 90s."

If you're willing to pay more for cooler temps, there are a couple things you could do right now to fulfill your wish without burdening the rest of us.

2. Air conditioning (have you heard about this invention?)

I know I know, my suggestions won't re-distribute wealth or make Al Gore filthy rich, but they will achieve your plea for temperate relief.

I wonder if the Dinosaurs were willing to pay more to warm things up a bit at the onset of the LAST ice-age ?

I have one question to ask....if global warming is inevitable and sea levels are on the rise, why are banks still lending $$ BILLIONS for beach-front property ? These properties should be free-falling in value as SOON they will be un-inhabitable !!!!

Ignorance is thee most expensive commodity.