Tax those tacky ads to pay for health care

Health care continues to be all about the money.

The health care reform debate on Capitol Hill also has run into the expected fiscal roadblocks.

Congressional Budget Office estimates are that a bill drafted by the Senate health committee would cost $1 trillion to cover just 16 million more uninsured folks. So the Senate has countered with a proposal that would require most people to buy health insurance, as well as authorize an expansion of Medicaid coverage and create consumer-owned cooperative plans instead of the government coverage that Obama wants.

Some of the Senate plan is laid out in a draft document obtained by the Washington Post. It's so "draft" in fact, that you're going to have to be able to read upside down to get all the info. Serendipitously fitting of this task, don't you think?

Across the Hill, House Democrats are examining various funding options. They include a surtax on the rich, an increase in the payroll tax for all workers, the ever-popular sin tax on sugary drinks and alcohol and possibly a national value-added tax of up to 3 percent.

Ad tax option: Christopher Bergin at Tax.com, however, has come up with a revenue raiser I really like. He suggests taxing irritating television commercials.

"You know the ones that start off by telling you that if you have a hangnail you must ask your doctor to prescribe the latest drug the company responsible for this annoying break in your TV viewing has invented,' blogs Bergin. 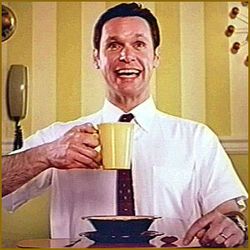 He may be onto something.

Bergin cites a Bloomberg report in which House Ways and Means Chairman Charles Rangel (D-N.Y.) says he and his colleagues are considering imposing a tax on drug makers by taking away the companies' deductions for advertising expenses. It would raise, says Rangel, $37 billion.

Bergin offers a way to collect even more. "Maybe we can have a marginal tax apply based on how annoying specific commercials are," he suggests.

Which commercial would you want to heavily tax? Personally, I want to tax every "male performance" ad into oblivion! Buh-bye, Bob!