State taxes on the rise

There's been talk of late by federal officials and politicians of the "green shoots" of an economic recovery, but at the state level, most economic lawns are still crunchy brown from a serious revenue drought.

The percentage drop comes to $28.8 billion less than the same period a year earlier, according to an examination of state income tax collections by the Nelson A. Rockefeller Institute of Government, the public policy research arm of the State University of New York.

The report, "April Is the Cruelest Month," tallied state tax collections from January to April for 37 of the 41 states that impose broad-based personal income taxes. April is the month during which states collect the most income tax revenue because most follow the federal April 15 filing deadline.

Of the 37 states reviewed, the Rockefeller Institute found that 34 reported revenue declines. Arizona experienced the steepest drop, a 54.9 percent decrease from last year. 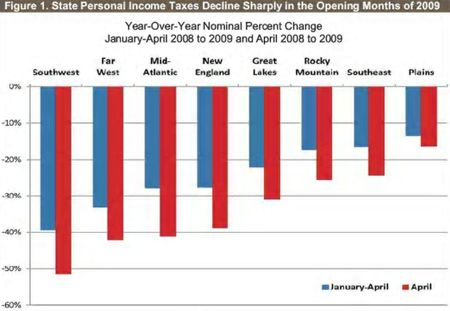 Data were not available in time for the report from Kentucky, Missouri, Mississippi, and New Mexico.

"Given the ominous picture of personal income tax collections, deeper overall revenue shortfalls and further deterioration in states’ fiscal conditions are likely on the way for most states for the April-June quarter of calendar year 2009," said Rockefeller Institute Senior Fellow Donald J. Boyd, who co-authored the report with Senior Policy Analyst Lucy Dadayan.

"It is clear that state income tax revenue in April and May has fallen short of what states expected by many billions of dollars," said Boyd. "Exactly how that will translate into new budget shortfalls is not clear, but budget gaps are likely to have increased by several multiples of the amount by which tax revenue has fallen short. Many states have begun revising their budget forecasts so that elected officials can take the new shortfalls into account as they finalize their budgets."

The answer? Raise rates: Many states are responding to the dire collection numbers by increasing their tax rates. My tax blogging colleague taxgirl has taken a look at state tax increases in New Jersey and several other states.

It's a natural reaction, but it might not help. If people aren't making as much money, either because they've lost their taxable income paying jobs or their investment income evaporated as the stock market crashed, then state treasuries also are out of luck.

Target millionaires: So legislators in several states have taken to targeting those they think (hope) will be more able to pay: their wealthiest residents.

The latest state to enact a so-called "millionaire tax" is Hawaii. According to the Tax Foundation, the Aloha State is the fifth one to increase its top individual income tax bracket, joining California, Maryland, New Jersey and New York.

Such taxes are unique, say Tax Foundation analysts, in that they impose a top rate near or above 10 percent on a small subset of high-income earners.

But the problem is that it's not just the wealthy who get caught in the increase.

The income level at which the new top rate applies is often a sharp jump from where the previous top rate applies, according to the Tax Foundation, but with each new "millionaire's tax," the tax is kicking in on more and more people who are not millionaires.

The 10 states with the highest rates:  Where does you state rank in the overall income tax rate ranking? According to a recent Forbes.com article, the average rate in the states that levy income taxes is 6.5 percent.

Some, as we noted, have much higher rates.

Forbes.com researchers have compiled a slide show of the 10 states with the highest rates. In case you don't have time to view the details now, here's the list, starting with the 10th highest rate, along with the top rate for each state:

As you can see, even taxpayers in the Midwest, a region typically thought to be less-inclined to raise taxes, aren't exempt from the high top tax rate trend.

"A tax on labor is slavery." -- Thomas Jefferson

If you are a father also consider purchasing a long term insurance policy. There is such a thing as burdening your children. If you become sick and unable to care for yourself you put your children in an unenviable position of shaking up their (busy) lives to figure out how to care for an elderly parent. Plus, long term care expenses can wipe out your nest egg, easily. That's money intended to be passed to kids and/or grandkids.