No highway tax dollars at work

When I was a kid, I always got a kick out of the sign that was posted alongside road crews: Your highway tax dollars at work.

Yes, I was a weird kid, noting tax-related situations at a young age. No comments, please, from the Peanut Gallery (or hubby) about the use of the word "was."  That's not the point, or at least not the main one, of this post.

The point today is that you don't see, or at least I haven't seen, those signs in a long time. And there's apparently a good reason for their disappearance.

There's no money, for the second consecutive year, for roads.

Emptying out the highway fund: Cash for construction and repair of most of our roads comes from the federal Highway Trust Fund. Last week, federal officials announced that account is likely to be out of money by end of the summer. 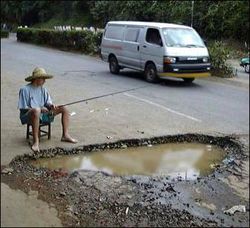 According to the New York Times story Congress Grapples, Again, With How to Pay for Transportation Projects, "lawmakers said they might be forced to bail out the fund in August with $5 billion to $7 billion from general tax revenues, just a year after they provided it with an $8 billion bailout."

You and I, who will have to eventually pay for such replenishing of the trust fund, also are part of the reason it keeps running short. The bulk of the money funneled into the account comes from the federal gasoline excise tax. And for the last couple of years, we've not been driving enough to keep the highway fund steadily in the black.

Around this time In 2008, pump prices hovering around $4 a gallon were a great reason for limiting road trips. This year, gasoline prices are about half that, but the recession has put a crimp in our motoring.

So how does Washington plan to make up the difference? Well, there's that aforementioned transfer of general tax collections to the highway account. Supporters of the tax shift say it's a must-do, especially since infrastructure projects are key to keeping the economy from grinding to a total halt.

And don't forget that Uncle Sam now owns 60 percent of GM. Being a good business owner, he would really like for purchasers of his shiny new Chevys to be able to hit well-paved roads.

Time for a tax hike? But some lawmakers are balking at yet another bailout, even one connected to America's love of all things automotive.

That's led to the virtually unthinkable: Members of Congress in both parties talking about hiking the federal gas tax.

Yep, it definitely is not an election year. Remember in 2008 when presidential candidates were falling over themselves calling for a summer gas tax holiday?

But times and political considerations have changed. There's a growing consensus that it's about time to discuss, if not actually raise just yet, the 18.4 cents per gallon gasoline tax. It's been at that level since 1993, and over the years inflation has eroded about a third of the tax's purchasing power.

Gas tax opponents fear an increase would be counterproductive. Higher fuel prices, they say, will simply mean people will cut their drive time even more.

Plus, they argue, as drivers and manufacturers embrace more fuel-efficient cars, any tax hike is likely to turn out to be just a temporary trust fund solution.

If the gas tax goes up, will it affect your driving habits? Have you purchased a more fuel-efficient car? Do you plan to do so soon?

And don't forget that Uncle Sam now owns 60 percent of GM. Being a good business owner, he would really like for purchasers of his shiny new Chevys to be able to hit well-paved roads.