The only thing worse than having to collect unemployment is having to pay taxes on it. That's right, Uncle Sam considers this last-resort money as taxable income. 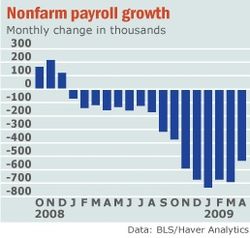 This tax fact is a surprise to many laid-off workers. And the ranks of folks facing the dual shock of losing a job and then owing the IRS money on unemployment benefits keeps growing.

The Bureau of Labor Statistics announced last Friday that in April another 563,000 were without work, pushing the total jobless to 13.7 million. That translates to a national unemployment rate of 8.9 percent, a 26-year high.

However, there is one teeny, tiny silver lining for those depending on unemployment benefits. This year, a portion of that money is exempt from federal taxes.

Insult to injury: Previously, all government financial assistance you got to help tide you over until you landed another job was taxable. That always struck me as one of those nasty kick 'em while they're down situations.

But in 2009, the first $2,400 of unemployment benefits is not taxed. This relief is part of the American Recovery and Reinvestment Act that became law in February.

It might not seem like much, but when you're struggling to put your life back together and pay bills, every little bit helps.

Tax on the rest: Remember, though, that you still must pay tax on benefits in excess of $2,400.

So that you won't have to come up with the money in four estimated tax installments, or worse, in one lump sum when you file your annual return, you might want to consider having federal taxes withheld. This is the same system as payroll withholding, only now you file Form W-4V with the unemployment benefits office.

This form, or "voluntary withholding request," allows you to elect withholding from your unemployment compensation at 10 percent of each benefit payment.

You also can file another W-4V later to stop the withholding if you find that your cash flow situation requires you bring home as much as you can get.

Other unemployment assistance: The American Recovery and Reinvestment Act, usually referred to as the Obama stimulus package, also created several provisions to help the unemployed.

The law, which took effect Feb. 17, extends and increases unemployment benefits, as well as some government subsidization of COBRA medical coverage.

And if you'd like a little misery loves company consolation, check out Miss Pink Slip's blog chronicling her adventures in unemployment.