Internet betting gets another advocate

Yes, the hubby and I are taking a brief vacation. As good Americans, we're doing our part to help stimulate the economy by spending in lovely Lost Wages, I mean Las Vegas, Nevada.

To be honest, we're not big gamblers. We really came here to see some shows. No, not Wayne or Cher or Barry.

We dropped by the Blue Man Group last night; it was fantastic!

Later this week we'll take in a couple of Cirque du Soleil performances (Mystere and O), as well as see the irreverent magic of Penn and Teller.

But you can't escape casinos in Las Vegas. We've been walking through them, and some of the larger hotels are like huge amusement parks with slots and poker and blackjack and more ways to bet thrown as just one more attraction. 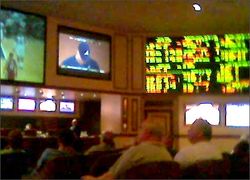 Last night, we also dropped by the Venetian's sports book lounge to catch the end of the Capitals-Penguins NHL playoff game. It was quite an experience.

That blurry photo there to the right (hey, it was dark and that's from my cell phone, as I stupidly left my camera in our room), gives you an idea of what these places are like. Walls of betting odds (those orangy-red and greenish-yellow lines), TV screens of multiple sizes and continuous electronic info crawls updating various sporting events.

Cheers erupt not only for actual plays, but also actions on the field or ice or court that affect the betting lines. It was quite an experience. As for the game itself, the Caps pulled it out in OT while the Joni Mitchell "Raised on Robbery" line about "a little money riding on the Maple Leafs" kept playing in my head.

Online betting coming back? We're having a lot of fun, thank you, although it's surreal to see so many people betting.

Many more bettors prefer to do so from the comfort of their own computer screens, even though that's technically illegal in the United States. Such restrictions, however, haven't stopped everyone, as I noted back in April in my Online gambling on its way back to the U.S.? post.blog post.

The futility of laws to stop online betting is part of the reason for a bill introduced last week to remove the prohibition. Currently, the Unlawful Internet Gambling Enforcement Act (UIGEA), passed in 2006, restricts e-payment system for Americans who gamble online.

On May 6, U.S. House Financial Services Committee Chairman Barney Frank (D-Mass.) discussed his proposal to change that. He wants to make it possible for Americans to legally bet online and, in the Congressman's words, "put an end to an inappropriate interference with their personal freedom."

H.R. 2267, the Internet Gambling Regulation, Consum er Protection, and Enforcement Act of 2009, would instead regulate such gambling at the federal level. Internet gambling operators could obtain licenses authorizing them to accept bets and wagers from individuals in the United States.

In addition, Frank is sponsoring separate legislation, H.R. 2266, the Reasonable Prudence in Regulation Act, which would delay implementation of additional UIGEA regulations set to go into effect on Dec. 1. These rules were added by Dubya's administration. Frank says his proposal would stop Federal regulators from enforcing the UIGEA until Congress has had a chance to decide national policy. 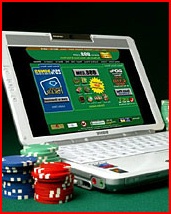 Essentially, Frank's bill would allow licensed Internet gambling operators to accept bets and wagers from U.S. residents on the condition that the companies maintain effective protections against underage gambling, compulsive gambling, money laundering and fraud. The online betting firms also would have to abide by prohibitions and restrictions on types of gambling outlawed by states and Indian Tribes.

The Treasury Department would have exclusive authority to establish regulations and license Internet gambling operators. License applicants would be subject to criminal background checks and review of their financial condition and corporate structure, business experience and suitability. They also would have to agree to be subject to U.S. jurisdiction.

Treasury could revoke or terminate the license of any operator who fails to comply with the bill's provisions. Violators could be fined or imprisoned for up to five years, or both.

I wish Frank well with this effort. We've wasted a lot of time and resources trying to close this barn door well after the horses were out and on bet-accepting racetracks. It's time to stop wasting tax dollars and start collecting some more of them in this area.

Sports betting expanding, too? The potential for increased tax revenue also is the motivator behind a betting expansion effort in Delaware.

For the last week or so, some Delaware lawmakers have been pushing a measure that would expand betting options in that state. After several tries, a sports betting bill finally passed the Delaware House of Representatives, and now is awaiting state Senate action.

The First State is trying to become the only state east of the Mississippi to allow legal gambling on sporting events. Delaware, like many states, already accepts some bets at its combined racetrack casinos.

Supporters of the change, including the state's Democratic governor Jack Markell, see increased betting as a way to address the state's fiscal crisis. Delaware is facing a projected $778 million shortfall in its fiscal 2010 budget. Sports wagering advocates say the change could bring in $55 million a year in new taxes.

It's all about the money, too, for opponents. The state's casinos say sports betting would drive them out of business. According to the News-Journalof Wilmington, Del., Patti Key, the CEO of Harrington Raceway, told lawmakers during earlier debate on the bill that the larger state take of slot machine revenue would cost the track $3.2 million and that it would not make any money from sports betting.

Oh, yeah. The NFL and National Collegiate Athletic Association also have been lobbying against the bill.

To appease racetrack opposition, lawmakers lowered the state cut of revenue a few percentage points. Delaware also has agreed to create a committee to look into fast-tracking live table gaming at the casinos, which are now only allowed to use electronic games like video poker and slot machines along with betting on horse racing.

There's no word on what Delaware might do to alleviate sports league concerns.

So how can Delaware get into sports betting territory that so far is restricted to Lost Wages, Nevada?

In the late 1970s, Delaware conducted a brief and unsuccessful experiment with a sports lottery. That foray into sports betting allowed it, along with Nevada, Montana and Oregon, to be grandfathered under a 1992 federal law that otherwise bans sports gambling in the United States.

It will be a great day if we can ever bet legally online in the comfort of our own homes! This is supposed to be a free coutry and all I want to do is use some of my hard earned money for a little entertainment that hurts nobody! and yet the government says I can do that! Really irritates me. All legalizing will do is make more money from taxes and make alot of people happy. What would be so bad about that!??

"The futility of laws to stop online betting is part of the reason for a bill introduced last week to remove the prohibition."

- Just a classic case of "if you can't beat them, join them"? Seriously though, I also do hope that some form of regulation should be in place.

I wrote all the back in April, that any ban is ridiculous and can't possibly be enforced.

Just recently, very close to me, joined an online sportsbook. He was able to deposit money with his US Credit Card, place a sports bet, play UNREGULATED online slots and UNREGULATED online poker against other players from around the world.

Of course, he lost his 100 bucks, but was anyone hurt? Nope. It actually hurts me to agree with Rep. Frank, but in this ONE instance the man might have a point.

P.S. it really hurt typing that I may agree with Frank.