I'm back home from vacation, but taxes in a traditional getaway spot continue to fascinate.

I blogged yesterday about the Hawaii legislature's override of Republican Gov. Linda Lingle's veto of tax increase legislation, most notably for higher-income residents.

The legislation also included a cigarette tax hike. And the veto override law apparently has produced a 4½ month tax holiday on tobacco products other than cigarettes.

In fact, say tax experts, the new cigarette taxes could in fact be unintentionally nullified.

Tobacco tax holiday: Hawaii's pipe and cigar smokers, as well as those who get their nicotine fix via snuff and chewing tobacco, will not pay tax on those products until fall.

The inadvertent tobacco tax holiday comes because of an error in the new law. Without further action, it could cost the state $400,000.

The problem comes because of dueling tobacco tax laws created during the override effort.

The Hawaii legislature passed two bills that increase the tax on tobacco products. Gov. Lingle signed one measure (H.B. 1175) to increase taxes on cigarettes. However, she vetoed another (H.B. 895), the tax on smokeless tobacco. The legislature then overrode that veto.

The different parameters of the two bills are creating a problem for revenue-seeking lawmakers and an accidental tax holiday for some tobacco consumers.

The bill enacted by the veto override vote did not specify the tax to be collected on tobacco products other than cigarettes. The time frame in question is from the bill's enactment until Sept. 30.

So that means for the next few months, say tax watchers in the Aloha State, the taxes on other tobacco products are not in effect. The Tax Department will be notifying tobacco product sellers of the problem and letting them know that they are obligated to collect the taxes until Oct. 1.

Total tobacco tax elimination? A bigger issue is the possibility that the override law will actually snuff out the higher cigarette taxes that lawmakers thought they were creating.

H.B. 895 increases the tax on tobacco products like chewing tobacco and cigars, but keeps cigarette taxes at the current level of 10 cents per cigarette.

However, since the override vote made H.B. 895 the law after H.B. 1175, some tax watchers in the Aloha State say that the provisions in the override-enacted law take precedence. That means the lower cigarette tax rate specified in H.B. 895 effectively cancels out the previous cigarette tax increase. 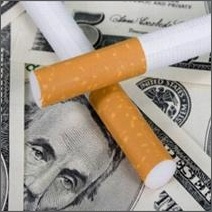 If the cigarette tax increase is accidentally nullified, it will mean the state is out an estimated $22 million a year that lawmakers were counting on to help balance Hawaii's budget.

The state House's Finance Committee chairman says the mistaken tax holiday cannot be corrected, but the cigarette tax switch can be handled by a legislative mechanism that allows the two laws to be blended together. The governor's office is taking the judicial route, asking the attorney general for guidance.

Lowell Kalapa, executive director of the independent Tax Foundation of Hawaii, is among those who thinks the legislature killed the cigarette tax increase.

Kalapa doubts that the state's revisor of statutes, who is employed by the Legislative Reference Bureau, has the power to put the dueling bills together.

You can bet (sorry, although I'm home some effects of our Vegas vacation linger) this battle isn't over.

Meanwhile, Hawaii residents who use the suddenly tax-free tobacco products might want to stock up while the price is right.