The only good thing about investment losses is that you can use them to offset your gains. But with the way the stock market has been in recent months, many folks are asking, "Gains? What is this thing you call gains?"

But even when you have very little, or no, capital gains, your losses still can be of tax use. Currently, the law allows you to use up to $3,000 of your excess losses to help reduce your regular taxable income amount. 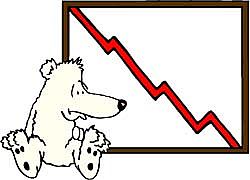 With the market turmoil -- OK, nosedive -- of the last couple of years, some investors have lost substantial amounts, and I'm not just talking about folks who bought into Bernie Madoff's Ponzi scheme. In these circumstances, any losses greater than three grand a year are carried forward and used, again at $3,000 per year, against future capital gains or, having none, subtracted from ordinary income. You can carry forward the losses for as many tax years as it takes to use them up.

Sen. Orrin Hatch wants to help folks who have such a surfeit of capital losses.

The Utah Republican has introduced a bill would increase the annual capital loss deduction from $3,000 to $10,000 and index the deduction for inflation.

"This is a question of fairness," he said. "Allowing individual investors to deduct only $3,000 per year when their total losses may come to many times that much is simply not fair. The tax code taxes gains without limit, so it should not place such a restrictive limitation on losses."

Hatch, who serves on the Senate Finance Committee, said he's gotten a positive response from the folks back home.

"One constituent with $60,000 in losses told me that unless he lived to age 90, he would not be able to claim his losses," Hatch said. "This is not right and it is time we did something about it."

Would the Hatch-Lincoln bill help you? Did you have much more in losses than gains this year? How long do you estimate your loss carry forward will be? Would you be more willing to sell loser holdings if you knew you could get more of a tax break from them?

Even a minimal tax loss increase would be fair and beneficial to a lot of taxpayers. With the government not setting a limit on capital gains, it should be a little more tolerant of those investors who have had large losses, and may never be able to realize any tax relief, from them

I've got a large number of clients who've had realized capital losses in the 6 figures, most who won't be able to use them fully in their lifetimes. Since so many other tax thresholds are indexed, it would be great if allowable losses limit increased. Maybe they'll finalize that when they fix the AMT mess (ha!)!