Where do our tax dollars go?

In the wake of the April tax return deadline and associated tax and deficit tea party protests, I thought you might find it interesting to see just where our tax dollars go.

The Center on Budget and Policy Priorities, or CBPP, took a look at 2008 expenditures and reports that during the last fiscal year, Uncle Sam spent $3 trillion, amounting to 21 percent of the nation's gross domestic product, or GDP.

"While 2008 expenditures — as a share of GDP — slightly exceeded those of recent years, they roughly equaled the average for the last three decades," say CBPP analysts. "Of that $3 trillion, more than $2.5 trillion was financed by federal tax revenues."

CBPP, a nonprofit research group that examines federal and state fiscal policy and public programs as they affect low- and moderate-income individuals, found that the bulk of our trillions of tax dollars went to three major areas:

These three categories, by CBPP calculations, accounted for one fifth of the fiscal 2008 budget. That last one, the children's health care program, is funded largely by tobacco excise taxes, which jumped on April 1.

Other costs: Expenditures in two other areas accounted for about one-tenth of federal spending, says CBPP. They are

Safety net programs include the various federal assistance programs for low-income families and individuals, such as food stamps, school meals and housing assistance. Tax breaks, such as the refundable portions of the earned income and child tax credits, also are counted here

The interest we now pay and that our heirs will pay on the growing deficit needs no explanation.

The diagram below offers a visual look at where our tax dollars went in fiscal year 2008. 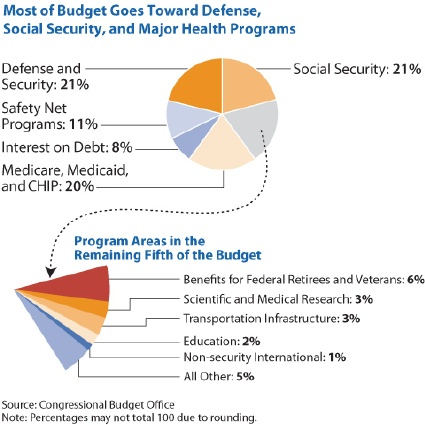 You'll also find the image and elaboration on the expenditures in CBPP's full report, available online or as a PDF file.

State costs counted, too: CBPP also took a look at how the states spend the taxes they collect.

As you would expect, CBPP found that each state's spending choices vary widely depending on factors such as how the state and its localities share public service funding responsibilities or how much state policymakers choose to invest in certain programs.

However, on average, most state dollars go toward education, from kindergarten to college, and health care.

The diagram below shows the breakdown of state spending last fiscal year. 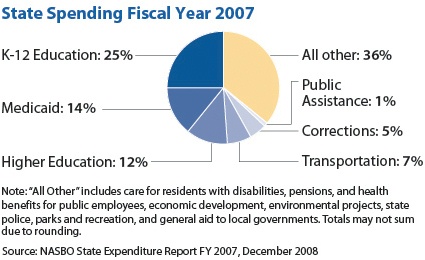 The full state report also has the image in its online version, as well as in PDF form.

Are you surprised by the way federal and state officials spend out tax dollars? Do you agree with the allocations? Where would you cut?

in the pie graph for state spending define other...??? in the graph for federal spending is that social sec. part include fed. retirees or both citizens and fed retiree