No, that's not just me celebrating the completion of my 2008 return three days early.

It's the Tax Foundation's annual calculation of when individuals have earned enough to cover their federal, state and local tax obligations.

So how is Tax Freedom Day calculated? An official government figure for total tax collections is divided by the nation's total income. This year, that shows that taxes will amount to 28.2 percent of our income.

The Tax Foundation says there are two reasons for the early arrival: 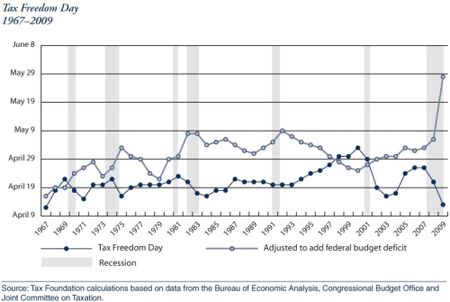 Nevertheless, say the group's numbers crunchers, Americans will pay more in taxes than they will spend on food, clothing and housing combined.

State data, too: Income and tax data also are parsed out to the states, producing 50 state-specific Tax Freedom Days.

You can see if you're tax-free in your state or still waiting for the tax cell to be unlocked in this summary of Tax Freedom Day 2009.

You also might want to check out the organization's full analysis in Special Report No. 165: American Celebrates Tax Freedom Day.

In that document, Tax Foundation staff economist Josh Barro also traces the course of America's tax burden since 1900 and examines the composition of today's tax burden by type of tax.

Me, I'm going to hoist a cool one to celebrate my personal Tax Freedom Day, as well as cheer belatedly for Texas' tax freedom day that arrived on April 6.

Tax Carnival update: Yes, Tax Carnival #52 will be going up later today. I appreciate your understanding and patience as the last-minute crush of tax deadline 2009 takes over my professional and personal life!

My bad! Thanks for the note; I have corrected myself, Want a full-time copyediting job?

Oh, you mean we have EARNED enough to cover our tax obligation?

Because you know if we had all PAID enough to cover it... we'd all be celebrating our mini-raises! ;)