Online gambling on its way back to U.S.?

Truth be told, it never left. 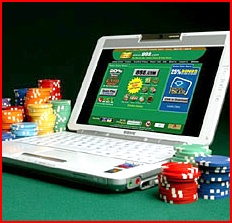 As I noted in this blog item in connection with the NCAA basketball Big Dance earlier this month second busiest gambling event each year in the United States -- the 2006 ban has done little to stifle online gambling.

And now, according to a story in today's New York Times, there just may be A New Chance for Online Gambling in the U.S.

The story notes, as I did in my blog post earlier this month, that U.S. Barney Frank (D-Mass.) is working on legislation that would overturn the Unlawful Internet Gambling Enforcement Act. It could be dropped into the hopper, says the Times, "within days."

And although a previous effort in 2007 by Frank to repeal the law failed, supporters of the change "think they might get a friendlier hearing in Washington this time around. President Barack Obama, they note, boasted of his poker prowess during the election campaign. And the Democrats, who are seen as less hostile to Internet gambling than the Republicans, have tightened their grip on Congress."

Going back to my April 6 gambling post, a study by PriceWaterhouseCoopers estimates that the United States could raise nearly $52 billion in revenue over the next decade by lifting the three-year-old online gambling ban and taxing the winnings.

Plus, the PWC study found that the ban is essentially worthless. Internet gambling is about 22 percent higher now than it was in 2007 because U.S. online gambling, even though illegal, keeps growing.

So it's time to regulate the industry and tax some of that revenue.

Personally, it won't matter to me. I don't gamble, aside from the occasional purchase of the already state-sponsored lottery ticket.

But there's no need to keep wasting time and money on a practice that is not going away. As the states have done with other gambling, such as lotteries and horse racing, make the online bettors pay up, too.

Not a sure bet: Despite the revenue collection possibilities and personnel changes on Capitol Hill, the repeal of the Internet gambling ban won't be easy.

Religious groups, as well as sports leagues, oppose anything that makes gambling more accessible. One of the most-vocal major league repeal opponents is the NFL, whose public announcements of player injuries are key data for wagerers.

What about folks in Nevada, the country's home of legal betting? State officials and casino executives are, so far, playing their cards close to their vests.

However, says the Times, speculation has increased that Las Vegas casino operators are looking into online gambling  possibilities. There have been reports that Harrah’s Entertainment, which owns Caesars Palace and other casinos, recently hired the former head of PartyGaming, a major online poker provider, in an unspecified role.

Taxable winnings: While lawmakers, lobbyists and gambling industry powers that be ponder the possible jackpot possibilities, things won't change for those of us who ante up a bit now and then.

Regardless of the type of gambling, your winnings are taxable income. That's one law that definitely will stay on the books.

Nice blog. Thanks for sharing this info.

I live in Nevada. Interestingly I can find nothing published concerning whether Nevada unions support or oppose Rep. Barney Frank’s bill H.R.2267 to legalize online gambling? I have not been able to determine which if any “casino/hotel employee unions” support or oppose Rep. Frank's bill H.R.2267. This bill if passed would repeal the “Unlawful Internet Gambling Enforcement Act of 2006” and legalize Online Casino Gambling. Online casinos don’t hire Casino/hotel employees; bartenders, kitchen workers; bellhops and card dealers.

Legalization of Internet gambling will provide millions of Americans lawful access to online gambling; any home with a computer has the potential of becoming a 24/7 Casino. It is problematic “legalized online gambling” might take market share from Nevada’s brick and mortar casinos e.g., if California gamblers elect not to travel when they can gamble in comfort at home. Has Nevada conducted studies to determine if the national legalization of online gambling—will economically injure Nevada workers dependent on the gaming industry for employment? Less affected by legalized online gambling might be gambling industry workers in other states where many industries offer diverse employment. Unfortunately Nevada remained dependent on the gaming industry for jobs after many other states legalized casino gambling.

If Congress does legalize national online casino gambling, passes H.R.2267, could some Nevada "casino employers” opt to instead own “online casinos” where far less employees and health insurance are required to operate a casino?

Sports Betting will make its way back soon. Looks like Delaware will be approving sports betting and then NJ will be next.