If you find my headline offensive, I apologize. But it accurately reflects just how offensive I find the latest actions of AIG.

The insurance giant is totally shameless. Since we, the taxpayers, bailed out AIG last year -- without, I must add, being specifically asked whether we wanted to do so -- our stake in the company has risen to $170 billion. And what has the firm done with our generosity? Used our money and abused our trust.

Now we learn that AIG is giving $450 million in bonuses to employees. Even more infuriating, these aren't just any employees. They are part of the financial products division, that same operating group that underwrote many of the risky subprime mortgages that set off our current economic nosedive.

Are you sitting down? There's more.

AIG wants to use another $121 million to pay senior executives and other company employees. Uh, didn't these same folks get treated, on our taxpayer bailout dime, to a ritzy spa retreat last year?

Again, I must ask WTF?

Obviously, that question is directed first to AIG, whose government-installed CEO Edward Liddy now claims that the company is (1) contractually obligated to pay the bonuses and (this is my favorite) that (2) AIG must hand over the money in order to hang onto the best people.

Liddy's exact words, from a letter to U.S. Treasury Secretary Timothy Geithner detailing the upcoming egregious outlays: AIG "cannot attract and retain the best and brightest talent … if employees believe that their compensation is subject to continued and arbitrary adjustment by the U.S. Treasury."

Uh, excuse me. First, Treasury should be able to make adjustments since it's the one handing out the billions in bailout money. And more to the point, these bonus recipients are the "best and brightest" that AIG has? To paraphrase an old saying, with employees like these … .

Questions for Congress, too: WTF also must be asked of our lawmakers.

Hey, Congress! I thought you were going to make sure that this kind of outlandish disregard for taxpayers -- we now own around 80 percent of this company! -- wasn't going to happen again.

What happened? Are the inmates truly running the asylum? Are AIG's remaining attorneys that much better than our government lawyers? If anyone needs bonus payments, and I'm in no way saying they do, the only ones with any shred of a claim are the insurer's legal team, which is whipping up on their counterparts who set up the government side of the bailout deal!

And what's this BS about the government facing possible lawsuits if the bonuses are disallowed? Please, let me help file the petitions. Let's see how many of these guys actually have the cojones to go to court and argue, under oath, that they deserve the bonus payment. I'd love to be on that jury!

Plenty of disgust to go around: As you suspect, I am not the only person aghast at this latest AIG in-your-face-suckers development. More reaction comes from:

It's the tax code's fault: Want some tax icing on the excessive bonus cake? Jeff Korzenik, says our tax code is to blame for hefty Wall Street bonuses.

In a commentary for Forbes, Korzenik, chief investment officer of VC&C Capital Advisers, points to Internal Revenue Code section 162(m), enacted in 1993, that governs the salary-based compensation of the top five executives within publicly traded companies:

The rule influences compensation by limiting the deductibility of salary expense to $1 million for each of these executives. Deductibility above that ceiling was permissible as long as the excess came in the form of performance-based compensation, whether cash bonuses or equity-based compensation like options (various technical rules needed to be followed as well).

IRC 162(m) is generally believed to be inconsequential because overall executive compensation, even of individuals covered by the act, has largely been unhindered. A few companies chose to accept the lack of deductibility of large salaries, but most simply find other ways to compensate their leaders. Over time, this has meant that executive pay has generally become more skewed to deductible bonus and option grants. The fact that deductibility limits were never indexed for inflation (which would have added about 40% to the deductible salary amounts) has only exacerbated this trend.

And while the financial industry bailouts have focused attention on excessive executive pay, Korzenik says "the real issue should be the executive pay regulations that contributed to the crisis in the first place." 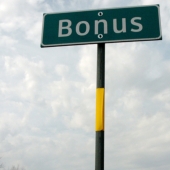 So Congress, while you're figuring out a way to keep us from getting shafted again by AIG and other bailed-out businesses, how about taking a look at Korzenik's tax code take on the whole bonus issue?

The view from Bonus, Texas: In a special section examining bonuses, Forbes decided to get a different perspective. It visited the tiny Texas town of Bonus.

Check out what my fellow Lone Star Staters think about all this big money being handed out to corporate execs.

AIG stole my "future". I thought that with the money saved with them that I would have it "easy" with my monthly pension check. Retirement was supposed to be a time with less stress and doing things that I enjoyed. However, I am forced to work now because my funds are gone. Since they got bailed out and basically used the money for them to have a good time, they should be held accountable and made to pay it back. They should also be held accountable and pay back a large percentage if not all of the money lost by investors, especially those who only had money in AIG and do not get a pension check or qualify for social security.

You ain't seen nothing yet! Although the $145 million in AIG bonus payouts is egregious, just wait until taxpayers learn that $$ billions of their money will be used to pay off hedge funds. There are many hedge funds that correctly bet that the bonds derived from sub-prime mortgages would tank. They bought credit deafult swaps that increase in value as the underlying bonds default. AIG took the other side of the bet - they lost- and now AIG has to make good on its contractual obligations with taxpayer assistance.

I felt the same way! Except I used bad language about it.

I think they should not pay the bonuses and go to court. What jury of their peers is going to find for them

Mabey if our goverment officials paychecks should be performance based.Then someone would have cared to ask about and investigate where every cent was going.We as a ppl have acted as a bank and handed out $ and AIG didnt even have to fill out a in depth business loan application i guess.If i want a loan sure as sh!t they will want a detailed explination of where their $ is going right down to how many rolls of toilet paper i plan to buy and use.Makes me want to not pay taxes if my goverment cant treat my $ with the respect it deserves.

Rascal,
I'm always open to counterpoints, but I still firmly belife that AIG is getting too good of a deal with our money.

I agree that false outrage is reprehensible. And as I’ve blogged here and in previous posts, Congress deserves much blame for not holding AIG’s and other bailed out companies’ feet to the fire when it comes to spending taxpayer bailout money.

But the spending has to stop, especially now that the U.S. (read taxpayers) own 80 percent of AIG and there's a new sheriff in town. If AIG lawyers were better during the closing days of the Bush Administration at getting free rein in spending federal funds than U.S. attorneys were at setting limits, then so be it. Now, however, it's time to renegotiate the deal; that's done all the time in busienss and elsewhere.

And I'll grant you that some decent, hard-working AIG folks who didn’t contribute to the economic debacle will end up getting hurt. Welcome to the real world. Someone usually pays more than they should for someone else’s mistakes.

Congress is talking tougher with the automakers. What strikes me as curious is that lawmakers are so willing to set parameters that could adversely affect factory line workers while letting white collar Wall Streeters continue to collect our money.

Perception does count and a line has to be drawn in the sand regarding these sweetheart bailout deals. For AIG, with it's previous excesses, that means that some of its current staff, whether deservedly or not, are going to pay the price.

In case you were looking for a counterpoint:

It's pretty unlikely that these bonuses are being paid to the people responsible for the disaster. Most of AIG's 100,000+ employees are doing normal insurance work (I know a few of them, actually!) and they haven't had any multi-billion dollar derivatives blowups.

Right now, I bet a lot of those people are updating their resumes and calling up recruiters: "Reason for leaving: made lots of money for my employer, was awarded bonus my contract called for, had the bonus yanked because my company bowed to pressure from non-shareholders who overreacted to bad information."

I agree with everyone as far as giving bonuses to executives of a companies that just took billions is completely ridiculous. My personal feeling is that now that the US Government owns 80% of the company, why can't it change these "contracts" and/or fire these executives. If I was on the board, I would like to challenge what these executives have done to warrant million dollar bonuses. In fact, give them two simple options, (1) keep your job and get no bonus or (2) keep you bonus and go find another job. Just my 2 cents.

Check out more on this on my site (that's how I found this site, was doing research). http://mymeans.net

What to say, the ship is sinking and crew tries to save for family as much as possible :) It seems share owners are helpless and can't stop this. And you know what's worse? Million here or million there, but these guys are completely burying reputation of AIG, this once proud insurance company lies in dust and to restore reputation (so important in insurance business!!) will take decades....Luckily Canadian branch was sold, I don't have to be ashamed facing my clients...