Ford hit the magic 60,000 hybrid sales mark in the fourth quarter of 2008. Actually, it went over it. By the end of last year, the auto manufacturer had sold 66,157 hybrid vehicles.

You know what that means. The tax break for hybrids will start to phase out. Soon. Like in a week and a half.

Ford phaseout time line: Under the law that created the tax break back in 2006, the full hybrid tax credit remains in effect for eligible vehicles as long as they are purchased through the end of the first calendar quarter after the quarter in which the manufacturer records its sale of the 60,000th hybrid. 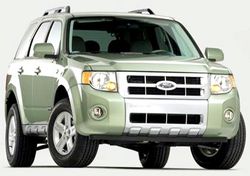 Basically, it just means that after an auto manufacturer hits the hybrid sales mark, buyers have three months to drive away in the affected hybrids, like an Escape pictured there to the left, and then claim the full credit amount on their tax returns for that year.

Since Ford hit 60K in the fourth quarter of 2008, buyers of the automaker's eligible hybrids, including those bearing its Mercury nameplate, can get the full credit for purchases through the fast-approaching March 31.

But on April 1, the Ford and Mercury hybrid credits are halved. No fooling.

That lower credit runs through the second and third quarters after hitting the 60,000 sales marks; that is, you get half credit for qualified Ford and Mercury hybrids bought between April 1 through Sept. 30 of this year.

After that, the credit is reduced again. Buy a Ford or Mercury hybrid from Oct 1 of this year through March 31, 2010, and you'll get to claim only a quarter of the vehicle's original credit amount.

And when April 1, 2010, rolls around, the credits for Ford and Mercury hybrids disappear. No fooling again.

Claiming the credit: Tax breaks for hybrids and other "alternative motor vehicles" are claimed on Form 8910. The various types of eligible autos are:

Details on each of these vehicles are found in Form 8910's instructions. That IRS document also lists the eligible makes and models, as well as maximum credit amounts, for qualified hybrids and some of the other credit qualified vehicles. Did you know Mercedes-Benz makes several tax-credit-worthy alternative motor vehicles?

You also can view the hybrid tax credit information at the IRS' special hybrid vehicles Web page, which has links to the eligible vehicles by model year. In those model year pages, you'll find the precised amounts, by date where applicable, of the credit you can claim.

Credit reductions: Remember, too, that if you bought a Toyota or Lexus hybrid last year, you can't claim a credit on your 2008 return.

Because of the popularity of that Japanese automaker's fuel-efficient vehicles, particularly the Prius, it hit the 60,000 sale mark first and its credits were completely phased out well before 2008 arrived.

If you bought a Honda hybrid last year, you'll have to do some extra figuring to come up with your credit amount, as Honda's credit began phasing out in 2008.

And if you bought or plan to buy a Honda hybrid this year, you'll get no credit on your 2009 tax return.

Fans of other hybrids have a bit more time to buy and get at least some tax break. Of course, the Ford and Mercury hybrid tax breaks start phasing out in a few days, as noted earlier in this post.

But eligible hybrids made by the various divisions of GM, as well as those made by Chrysler, Nissan and Mazda are still worth their full, original credit amounts and probably will stay there for a while based on the latest sales numbers.

Also keep in mind that the alternative motor vehicle credit, entered on line 54 of Form 1040 (you have to check the "c" box and write 8910 on the form), is nonrefundable. That means that if you owe $400 in taxes and are eligible for a $1,000 hybrid credit, you can only use that credit to zero out your tax bill. In this example, $600 of your hybrid credit will be wasted.

Is a hybrid worth it? In addition to the tax considerations, potential hybrid buyers also must take not only environmental concerns into account, but also overall economic considerations.

Hybrids, in most cases, are more expensive than their regular fossil-fuel consuming counterparts. That means you're going to need a lot of gas savings over several years to offset the vehicle's higher price.

And as a recent Kiplinger story notes, with cheaper gas now on every corner, some drivers may find it harder to justify the premium you pay for a hybrid.

I find your post about the phaseout really interesting and informative. Thanks for sharing this.