Most of the attention today is on Charles Darwin. It's the bicentennial of Darwin's birth. Google has an artsy icon in honor of the man who gave us one of the greatest, and most controversial, scientific breakthroughs. And tons of stories are out there discussing the British naturalist's findings.

As we reflect on Darwin today through a tax lens (that is what all y'all are doing today, right?), we can definitely say that the U.S. tax code has evolved over time. But Feb. 12 has a more direct tax connection.

Thanks, Abe: On Feb. 12, 1809, Abraham Lincoln was born in Hardin County, Ky. His actual birthday isn't such a big deal any more, since we celebrate it, along with George Washington's birth, as a Monday federal holiday. That annual commemoration, and call to shopping, is coming up in a few days. 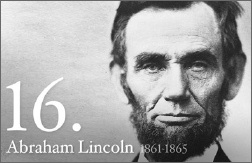 And while our 16th president achieved many noteworthy things during his time in the White House, his contribution to our tax system is usually overlooked.

OK, he didn't actually write the tax code. But he saw the need for an income tax and signed the legislation into law to help finance the Civil War.

Below, thanks to the research of the Library of Congress Business Reference Services, the Civil War Preservation Trust and Tax Analysts Tax History Project and Tax Museum, is a brief history of the United State's first income tax.

Our early tax history: The first federal income tax in American history became law in August 1861. It was created so that the government would have a reliable source of income to pay the interest on war bonds.

Initially, lawmakers wanted to implement an emergency property tax similar to the one adopted during the War of 1812. But the Constitution required the federal government to apportion the burden among states on the basis of population rather than property values.That created another set of problems.

Residents of lower-density western states, border states and poor northeastern states stood to bear a greater burden than those of highly-populated urban states, despite the latter’s valued real estate. So lawmakers followed the British example of income taxation, which that country used to finance the Crimean War.

Because it did not tax property directly, Congressional leaders viewed the income tax as indirect, and thus immune from Constitutional strictures.

The first income tax was moderately progressive: a 3 percent tax on annual incomes of more than $800. Back then, that amount exempted most wage earners. That levy applied to income up to $10,000, with a 5 percent tax imposed on earnings in excess of 10 grand.

Tax trouble from the get-go: While the first U.S. income tax looks appealing simple, according to one report, Lincoln himself had trouble with it. He is said to have misunderstood the law and overpaid his taxes by $1,279.15.

We know exactly what you went through,

Sure, our tax system today is much more elaborate than the one you signed off on, but some things, such as filing mistakes, never change.

And we do sort of think of you at tax time, sir, since most of us need a whole lot of pennies bearing your image to cover our modern income tax bills!