When a judge is kind enough to let you travel abroad while you're appealing your tax-evasion conviction, you really need to follow orders.

Back in July, Judge William Terrell Hodges said Snipes could head to London and Bangkok in connection with movie roles for which he had contracted.

Hodges said nothing about side trips. But Snipes detoured anyway.

Apparently, the lure of the "party of the decade" last November was just too strong to resist.

The grand opening of the Atlantis Resort on Dubai's Palm Island, an artificial island in the shape of a palm tree, cost $20 million (some of it obviously for the pyrotechnics shown below) and attracted a host of stars, including Snipes. 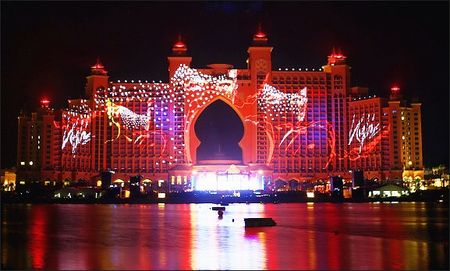 I hope he had a really, really good time, as that soiree was a violation of the terms of his travel. So the court has ordered the action star back to the United States and to turn over his passport once he arrives.

If it was me I'd be lucky to leave the state. Oh well, all the justice you can afford.