Monopoly money is OK with these uber-rich folks. They're all make believe.

Just in case last year's stock market troubles didn't leave us feeling poor enough, Forbes magazine compiled a list of 15 fictional characters who also are much wealthier than we. 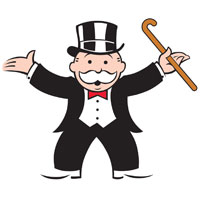 Personally, I question ranking Uncle Sam at the top. I know he can print his own money, but I fear all the bailout machinations will hurt rather than help his bottom line. And as a taxpayer, I'm a bit concerned that Uncle Sam might put more pressure on the IRS to go overboard when it comes to closing the tax gap.

It is good, though, to see the the two Scrooges, Ebenezer and McDuck, are hanging in there. And I'm sure Smithers is thrilled that Mr. Burns, his boss and object of his thinly veiled desire, is still putting away the dough, if not Homer's favorite doughnuts.

Fictional wealth seems to follow real money when it comes to gender. There's only one woman, Lara Croft, on the list. I'm sure she deserves the ranking, but I also wonder if the chance to use a photo of Angelina Jolie rather than the video game goddess influenced the section at all.

To be fair, for Tony Stark, Forbes opted for a head shot of Robert Downey Jr. instead of Iron Man's comic book alter ego.

In addition to the main list, Forbes highlights this year's eight newcomers: America's favorite and iconic uncle, Gekko, Jabba, Ebenezer, Veidt, Fowl, Lara and Mr. Monopoly. You can see who they displaced here.

Let's hope that as the stock market begins its first full week of 2009 tomorrow, it settles down and we can get back to putting more money, both real and fictional, into everyone's accounts.

your blog is the best. and this entry was awesome!